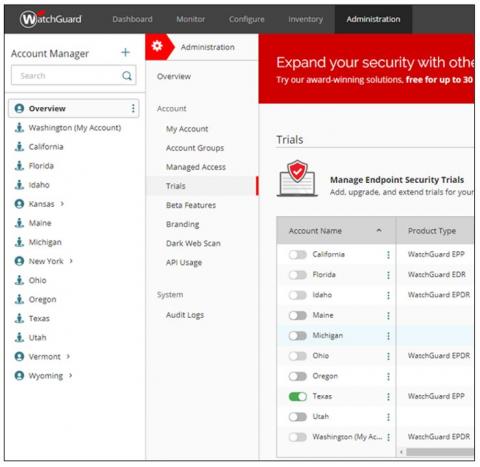 Partners of the security vendor can now deploy and manage the solutions WatchGuard acquired along with Panda Security last year through the same interface they use to administer WatchGuard’s network security and multifactor authentication systems. By Rich Freeman
Tweet

WatchGuard Technologies completed its acquisition of Panda Security on June 2nd, 2020, declaring that it would fully integrate that company’s suite of endpoint protection products with the WatchGuard Cloud portal within one year. This Wednesday, 12 months to the day later, it made good on that commitment.

As of this week, Panda’s solution lineup, now collectively renamed the WatchGuard Endpoint Security family, can be deployed and managed through the same interface partners use to administer WatchGuard’s network security and multifactor authentication systems.

That represents a significant landmark for WatchGuard, a long-time leader in firewall hardware now reinventing itself as a provider of interconnected, centrally managed security offerings for the era of post-perimeter, anytime, anywhere computing. Michelle Welch, the company’s senior vice president of marketing, expects the change to drive faster adoption of Panda products among members of the WatchGuardONE partner program, roughly 30% of whom have tested or begun deploying those solutions to date.

“We’ve seen a significant number of WatchGuard partners start evaluating, using, and getting familiar with the endpoint solutions, and a lot of resale activity already happening prior to the integration with WatchGuard Cloud, but we believe that this is the next step that will really accelerate that adoption even more deeply into our partner community,” she says.

Tiering in WatchGuardONE is based exclusively on certifications, rather than sales revenue, so to stay at the silver level in that program after the six-month grace period expires, Panda resellers must earn a credential in endpoint security, network security, multifactor authentication, or secure Wi-Fi. To qualify for gold status and get richer rebates, they must collect two certifications, and they must attain all four specializations to reach platinum status.

“It’s really early days to see if we’re seeing much drop-off between granting status and maintaining status,” says Welch, who takes it as an encouraging sign that some 80% of Panda resellers new to WatchGuardONE have installed not-for-resale licenses for training purposes.

“We’ve seen just over a quarter, just over 25%, of those Panda partners already start shifting all of their behaviors through distribution, and we’ll continue that migration throughout this year,” says Welch, noting that there is no hard cutoff date for that process. “We are just starting to get to that point where we’re seeing Panda partners comfortable transacting at distribution, and now looking at evaluating the WatchGuard products and services.”

LG Gram for Business 17 (2020): Big Reasons to Like It
END_OF_DOCUMENT_TOKEN_TO_BE_REPLACED