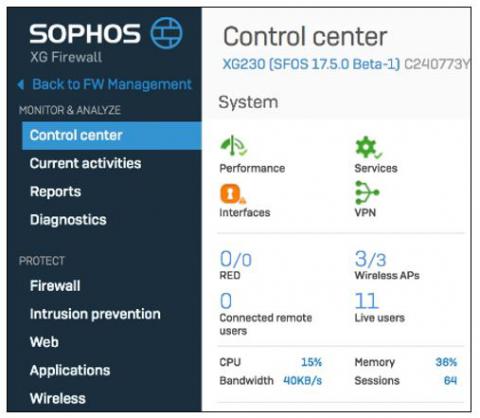 The update, which closes the last gap in Central’s support for Sophos offerings, allows partners to manage all of the Sophos offerings they use through a single consolidated management interface. By Rich Freeman
Tweet

Sophos has built support for the latest edition of its XG Firewall product into its cloud-based Sophos Central management plane. The update enables partners of the U.K.-based security vendor to administer all of the Sophos security products they use through one consolidated interface for the first time.

“Being able to have all your security portfolio and assets on one single pane of glass is one of the biggest challenges of cybersecurity,” says Dan Cole, senior director of product management for Sophos.

According to Sophos, Central currently processes more than 8 million transactions a minute for more than 82,000 organizations worldwide. XG Firewall was until now the only product in the Sophos product catalog not manageable through that system, which first reached market in 2016.

Compatibility with Sophos Central applies specifically to the 17.5 release of XG Firewall, which shipped last November. According to Cole, partners who manage that product through the same console they use to administer Sophos web, email, wireless, server, and mobile device security solutions will be able to identify and act on threats more rapidly.

Sophos customers that use XG Firewall as a controller for the company’s wireless access points can also now automatically perform compliance checks on endpoints identified by Intercept X as potentially compromised, or temporarily prevent those devices from accessing the network.

According to Cole, companies deploying new XG Firewall units will soon have access to “light-touch” provisioning capabilities as well. The added functionality will allow users to streamline the implementation process by presetting some configuration options through Central before plugging in the firewall and connecting it to the network.