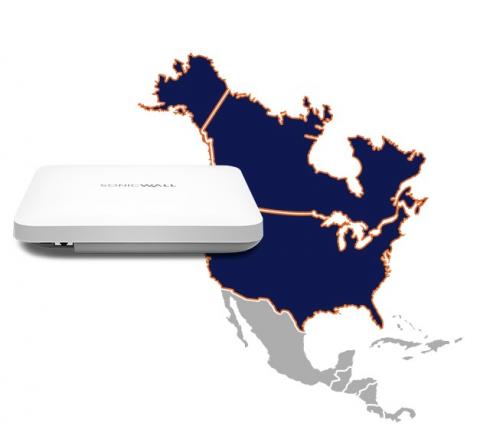 The first two members of the new SonicWave 600 series can increase overall wireless throughput by up to 400% compared to Wi-Fi 5 technology, the company says, and reduce latency by up to 75%. By Rich Freeman
Tweet

The SonicWave 641 and SonicWave 681, part of the vendor’s new SonicWave 600 series, are based on the 802.11ax standard, which according to SonicWall can increase overall wireless throughput by up to 400% compared to Wi-Fi 5 technology and reduce latency by up to 75%. Even businesses not yet on Wi-Fi 6 will see faster throughput, though, according to Jim Steinbacher, the vendor’s senior product manager for wireless.

“The 600 Series makes full use of the improved wireless capabilities represented by the Wi-Fi 6 standard. Even without taking advantage of those enhancements, 600 Series users are often seeing an overall performance improvement of 15-20% out of the box,” said Steinbacher, in remarks delivered via email.

Wi-Fi 6 is well suited to high-density, multi-device environments as well, SonicWall contends, making 600 series access points a strong foundation for building and scaling Internet of Things networks as a result.

Designed by a security vendor, Steinbacher emphasizes, SonicWave 600 series access points feature the same security-hardened kernel technology as the company’s firewalls. Those include SonicWall’s Capture Advanced Threat Protection sandbox service, Reassembly-Free Deep Packet Inspection, and Real-Time Deep Memory Inspection, which removes malware and other threats even over SSL/TLS-encrypted connections. Encrypted threats were up 132% year over year in the first half of 2022, according to SonicWall’s latest Cyber Threat Report.

“All network equipment should be purchased with an eye on security. Wireless is no exception,” Steinbacher says. “SonicWall takes a comprehensive view of security up and down the networking stack. As a result, our products work hand-in-glove with each other, unlike standalone wireless products.”

“For distributed businesses, the ability to manage each location from a single pane of glass in the cloud is critical,” Steinbacher says. “SonicWall’s Wireless Network Manager (WNM) offers them that capability, whether they manage the technology themselves, or utilize a Managed Service Provider.”

600 series access points support zero-touch deployment as well, according to SonicWall. End users can register new units and onboard them through the SonicWall SonicExpress mobile app, which will automatically detect and provision the hardware.

The SonicWave 641 and 681 are both available now at what Steinbacher calls “competitive” price points suitable for small, midsize, and large businesses. A third model, the SonicWave 621, is currently scheduled to arrive by the end of the year.

Certified Wi-Fi 6 products accounted for over half of wireless market share as of May, according to the Wi-Fi Alliance, the industry consortium responsible for Wi-Fi 6 and other Wi-Fi standards. The group expects more than 2.3 billion Wi-Fi 6 products to ship this year.

According to Steinbacher, businesses are embracing the latest Wi-Fi standard at a faster than usual rate.

“Normally we see an update cycle of around 5 years,” he writes. “With Wi-Fi 6, we see an accelerated cycle of just 3 years. What that means in the real world is that more clients will be able to take full advantage of the speed and security capabilities offered by the 600 Series far sooner than with previous Wi-Fi standards.”