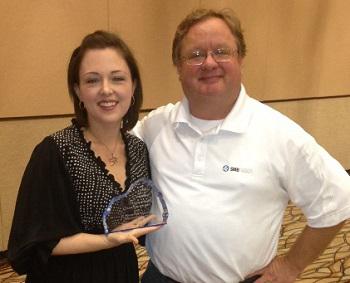 The event centers on XP migrations and the discussions that will be held surrounding the April 8, 2014 deadline. By ChannelPro
Tweet

Held during the breakfast session, Harry's address was preceded by a presentation from Sharon Fry, executive director, Outlook Foundation. During her discussion, Fry mentioned the work and mission of the Outlook Foundation, which is to provide donated computers that are then refurbished and reallocated to under-resourced children, siblings separated in foster care, and deploying members of the military. Note that SMB Nation is running a special for local attendees to bring their gently used PCs to donate, which grants them a discounted admission of $99 to the conference.

Fry also paid homage to Outlook Foundation's Founder John Iasiuolo who passed away this summer. If you remember, SMB Nation paid tribute in a blog post to John and the work he and his wife, Christine, have done for the SMB community via the foundation.

During Harry's keynote address, which discussed the "Disappearing MSP Middle Class," the conversation largely focused on the maturity of the SMB community, and how the master MSP is built for scale, as well as how you will need to "hang on fast" and avoid the middle class "trap."

Harry also revealed the steps for the transformation of SMB Nation, which include a new membership model with benefits, as well as a 22-city road show tour, sponsored by Lenovo, D&H, OOMA, Microsoft, and others.

We also can't forget to mention that XP Migrations are at the forefront of this conference, namely the discussions that will be had surrounding the looming April 8, 2014 deadline. To help assist our community with these efforts, we launched today a new XP Migrations Guide, which you can download here. Harry and other speakers will also be discussing various XP Migrations strategies throughout the remainder of the conference.

Rounding out Harry's keynote was the presentation of the Jim Locke Award (formerly known as the SBSer of the Year Award) to two community members. This year's winners were Richard Tubb and Kate Hunt of CompTIA. Hunt was present to accept her award, and during her acceptance speech she noted how community to her is about giving back and supporting the industry. Tubb was not able to attend the event.

MSP Makeover: Win A Day with Harry Brelsford
February 8th, 2019
Be a Microsoft 365 Hero - Nominate Yourself or Someone Else
July 1st, 2019