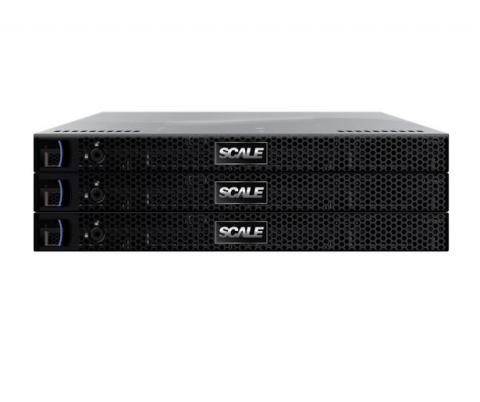 Purpose-built for remote sites with little to no IT staff, the new HE500 series combines a compact footprint with built-in remote management capabilities, extensive automation, and self-healing functionality. Pricing starts at $16,500 for a three-node cluster. By Rich Freeman
Tweet

Scale Computing has introduced a family of hyperconverged appliances designed for use in edge computing implementations.

Available now and powered by Scale’s HC3 HyperCore Software, the new HE500 series is optimized for settings with limited space and modest capacity requirements, yet high availability demands. It is the first product in Scale’s growing portfolio specifically tailored to such use cases, according to Vice President of Product Management and Support Dave Demlow.

“This is our first appliance platform that we really purpose-built to target a need that we’ve seen in distributed edge environments,” he says.

In particular, he continues, HE500 devices provide the built-in automation and centralized management capabilities required at remote sites with little to no IT staff. They also come with self-healing functionality to reduce truck rolls.

“This was designed to be set and forget,” says Demlow of the new platform. “When expected or unexpected hardware failures—or software failures for that matter—occur, the system is monitoring all those pieces and can take action in order to keep the virtual machines and the applications up and running and absorb those failures without having to wake somebody up at three in the morning.”

Demlow cites disk failure as representative of the kinds of issues that HE500 devices can recover from without in-person assistance. HE500 appliances are designed to simply shut down broken drives and continue operating without data loss on remaining resources.

“The system takes care of that automatically, re-protects everything, gives you full redundancy, and all you really lost is the capacity that was provided by that one particular disk,” Demlow says. “A month later when you are already going to roll a truck for regular maintenance, they can show up with the hard drive, pop it in, and replace the capacity.”

The HE500 series features the compact footprint and resource efficiency that edge locations need too, according to Demlow. Like other Scale Computing solutions, the new devices utilize a lightweight software-defined storage layer built directly into each compute node rather than a virtualized storage appliance that must be installed and run separately.

“If you were trying to use pretty much any other hyperconverged software stack, the first thing you would have to do is load up a virtual storage appliance on it,” he says. “Those take up 24 gigabytes of RAM and go up, depending on what features and functionality you need.” That kind of overhead is a “non-starter” in edge environments, Demlow contends.

There are five HE500 models in all. Three are 1U rackmount devices and the other two feature tower cases. All of them contain Intel Xeon E-2100 series processors and either 32GB or 64GB of DDR4 RAM. Rackmount models are available with four SSDs, four HDDs, or in a hybrid configuration featuring one flash drive and four spinning disks. Tower models come in all-SSD or all-HDD designs and provide up to 64TB of raw storage capacity, Demlow notes, making them a potential high-capacity backup target.

Typical use cases for the new product line include satellite offices with a handful of locally-installed applications or a video surveillance solution, and retail outlets that need reliable on-premises infrastructure for point-of-sale software and physical security systems, as well as smart lighting, smart thermostat, and other Internet of Things solutions.