Roku Makes HDMI Version of Its Streaming Stick for $49 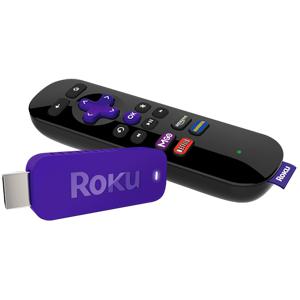 The new player can put more than 1,200 channels of entertainment on any TV with a free input. By Channel Pro
Tweet

Back in 2012, Roku announced the Streaming Stick. The pint-sized plug-in device looks a lot like a USB thumb drive. However, the idea was that it could easily turn any dumb TV into a smart TV to get more streaming media into your home theater system.

The device is extremely easy to use. Basically, all you needed to do is plug it into an empty port—an empty MHL port. Aha! There was the catch.

Of course, not every TV has MHL support. That’s probably why Roku just announced an HDMI version of its Streaming Stick.

The new HDMI version is very similar to the MHL version. It comes packing Wi-Fi support, so users just need to plug in the device to start receiving the entire Roku channel lineup. At last peek, that selection included over 1,200 different channels of entertainment, news, sports, games, and more, with up to 1080p HD video. (FYI: Some subscriptions and/or fees may apply, depending on the service.)

Roku has also paired the Streaming Stick with its own remote control, so users can easily access the Roku interface, as well as the Roku Channel Store. (As one reader pointed out, it now also has buttons that will provide instant access to Blockbuster, as well as Netflix, Amazon Instant Video and M-Go.) The Streaming Stick is also compatible with Roku’s free apps for iOS and Android devices. That way, you can cast Netflix, YouTube and personal media from portable devices to the Streaming Stick and the big screen. Roku plans to add additional mobile features in the near future.

“The new Roku Streaming Stick gives consumers more choice for streaming entertainment to the TV than any other device,” said Jim Funk, senior vice president of product management at Roku. “Consumers want a ton of entertainment, an easy way to search for movies and TV shows, and options to control the experience with a remote or mobile device. This new Roku Streaming Stick brings all that and more—and in a tiny form factor.”

In case you’re wondering, Roku does plan to keep the original Streaming Stick, which will be bundled at retail with Roku Ready devices. Currently, there are 20 partners in that program.

For the rest of us, the HDMI Roku Streaming Stick will be available sometime in April, with an MSRP of $49.99.