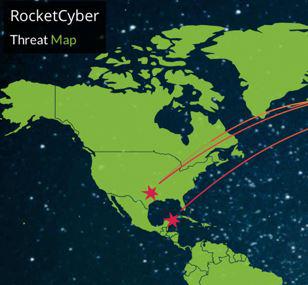 Like the vendor’s other products, the new tool is designed to be easily adopted, implemented, and supported by MSPs with limited in-house security expertise who want to enter the cybersecurity services market. By Rich Freeman
Tweet

RocketCyber LLC has equipped its collection of applications for cybersecurity newcomers with a live threat map.

Available free of charge to the Dallas-based vendor’s partners, the new tool provides a visual representation of malicious and suspicious activity on endpoints under management in real time. Details provided by the system include which customer and computer are under attack, where the attack originated, and when the attack was detected.

“Given that MSPs know their customer networks best, exposing real-time global attack data on the endpoint empowers the provider to quickly remediate the threat,” said RocketCyber CEO Carl Banzhof in a press statement. “For example, how many dentist offices in North America can justify an SSH or FTP remote connection from N. Korea.”

Banzhof and co-founder Billy Austin, RocketCyber’s president, created the company two years ago and brought it out of stealth mode last year in time for the 2018 edition of ConnectWise’s annual IT Nation Connect conference. The two leaders worked together previously at Citadel Security, a vulnerability remediation vendor later bought by McAfee, and iScan Online, a maker of data breach risk solutions eventually acquired by SolarWinds.

The RocketCyber suite consists of “RocketApps” for various security functions that channel pros can use singly or in combination. Engineered to be easily adopted, implemented, and supported, those systems all seek to help MSPs who provide anti-virus, firewall, and other entry-level security services today roll out more advanced cybersecurity offerings quickly.

A free edition of the product includes apps for breach detection and threat hunting only. The premium edition, which costs $1 per device per month, provides access to the entire RocketApp catalog.

Speaking at last year’s IT Nation Connect, where the RocketCyber suite made its debut, ConnectWise CEO Arnie Bellini called cybersecurity a massive opportunity for MSPs. While the market for managed services is rising at a 12 percent CAGR presently, he said, security revenues are climbing 17 percent.

Researcher Cybersecurity Ventures expects global cybersecurity spending to top $1 trillion cumulatively between 2017 and 2021, according to its 2018 Cybersecurity Market Report.