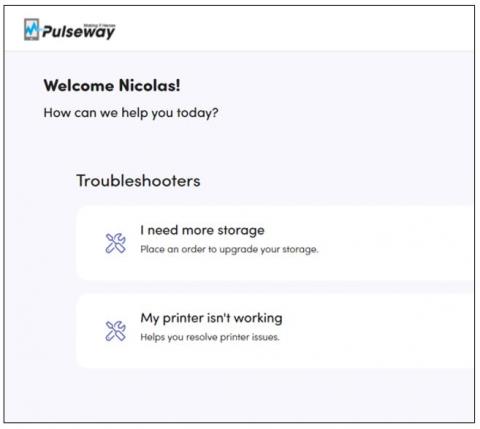 The new tool draws on a workflow automation engine to help end users resolve support issues without assistance from a technician, saving them time while raising an MSP’s productivity. By Rich Freeman
Tweet

Pulseway has added a self-serve client portal to its suite of line-of-business tools for MSPs.

The new system, which is available now, draws on the workflow automation engine Pulseway rolled out last year to help end users resolve support issues quickly without assistance from a technician.

“We’re reducing [MSP] workload, but at the same time improving end user satisfaction, because the one thing that really annoys end users is having to wait for a resolution to their issue,” says Andy Ellwood, Pulseway’s vice president of product marketing.

If automated measures fail to resolve the problem, the system opens a live chat session with help desk personnel and gives the technician involved a transcript of everything the customer has done and communicated up to that point, saving both parties time and effort.

MSPs can also configure the portal, which is white-labeled and brandable, with an option to skip the interactive Q&A process and go straight to a technician chat session immediately.

According to Mihalec, an automated self-serve help desk solution is exactly what businesses and MSPs alike need at a time when work-from-home users are inundating IT support teams with tickets that can wait hours for a reply. “People expect their issues to be resolved quickly,” Mihalec notes.

The portal boosts MSP productivity too by freeing up time that would otherwise be spent handling simple, repetitive maintenance chores. “It’s those routine questions that take up most of your day,” observes Ellwood. “You could spend days just resetting people’s passwords.”

Giving end users an easy way to connect with technicians via chat can also differentiate MSPs from competitors and further raise customer satisfaction, Ellwood adds. “Chat is now the preferred method of communication rather than phone calls.”

Use of the client portal by up to 10 users is available to Pulseway subscribers at no extra cost. MSPs who require more capacity can upgrade to a paid plan that accommodates unlimited users for $55 a month.

According to Mihalec, Pulseway plans to integrate multiple existing features of its platform with the client portal in the future. The next release will let technicians take remote control of endpoints from directly inside chat sessions, for example. Later updates will let users file and track support tickets, access a technical knowledge base, and utilize a password vault.

“At the end of the day, we’re exposing RMM capability to the end user,” Mihalec says.

Ease of use and technician productivity have been recurring priorities for Pulseway in recent product updates. In addition to adding workflow automation last year, the company updated its mobile app to let iPhone and iPad users execute commands via Apple’s Siri virtual assistant three months ago.