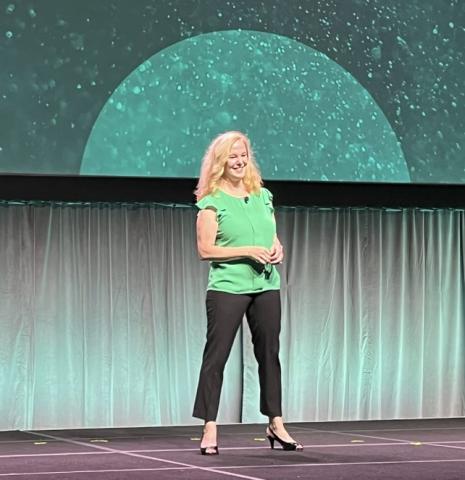 The distributor has long-term plans to unite its Varnex and TechSelect communities into a single company-wide membership organization, according to Kaye McMillan (pictured), who heads up the company’s CommunitySolv organization. By Rich Freeman
Tweet

The distribution giant discussed the forthcoming change with ChannelPro at its CommunitySolv event in Orlando. Held yesterday and today, the conference brought together members of SYNNEX’s Varnex partner community and Tech Data’s TechSelect community for the first time since those two companies merged in a $7.2 billion deal announced last March and completed six months later.

“That’s definitely the plan,” says Kaye McMillan, the distribution giant’s vice president of sales and communities, adding that the company will take its time about putting the plan into action.

“We recognize that there’s a lot of history that we need to be respectful of, and that the partners are very loyal and tied to their communities,” she says. “We will still have a Varnex and TechSelect for FY23, but by this time next year, or as we go into our FY24, we will have built out a combined community.”

McMillan has headed CommunitySolv, the umbrella organization for Varnex and TechSelect, since August following the departure of Sammy Kinlaw, previously the distributor’s senior vice president of North American sales communities. The decision to create a single community for the entire company is a change in direction from Kinlaw’s plan to operate Varnex, TechSelect, and a third, legacy SYNNEX community for cloud and mobility partners called Stellr independently of one another based on an analysis showing each group had different members with different business models and purchasing habits.

The same logic went into the decision to hold this week’s first-ever CommunitySolv conference, following Varnex and TechSelect events earlier this year, she adds. TD SYNNEX will no longer hold separate meetings for those communities going forward.

“It just made a lot more sense in terms making sure that they’re getting the same messaging at the same time from the same leadership team,” McMillan notes.

Combining the communities will give members more opportunities to network with a wider range of peers as well as greater clout with the distributor’s vendor partners, according to Bob Stegner, TD SYNNEX’s senior vice president of North American marketing.

“They’ll have a bigger voice now,” he says. “Size matters.”

Vendors appreciate the new strategy too, according to McMillan. “They want to get exposure to the entire community, and not just be focused on one community or the other,” she says.

CommunitySolv has been popular with vendors since its creation, in fact, according to Vice President of Product Management Kristi Kirby. “They’re happy with the access to the partners. They’re happy with the ability to engage more broadly,” she says, pointing to the more than 60 exhibitors in the expo hall at this week’s show as evidence.

“They’re all here,” she notes.