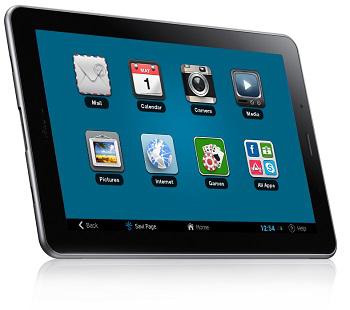 Wondering what to buy for your aging parents next holiday season? Think about this: a tablet designed specifically for seniors that incorporates applications they would actually use-including email, calendar, camera, pictures, games, movies, texting, and more-along with health monitoring and security solutions.

Plans for the Savi tablet were announced by Mobisoft Infotech, a Houston-based smartphone development company, and SEI-TEK Inc., a senior-friendly technology company. The touch-screen tablet will have a simplified, consistent look and feel, with minimal icons in a large format. Savi will also feature high-contrast color schemes and easy-to-read fonts.

The two companies envision a community of users that will benefit from services of interest to seniors, based on information obtained through research, interviews, and focus groups. Initially, Savi will be rolled out with applications. Eventually, it will be able to monitor biometrics such as blood pressure, heart rate, and breathing, and will include applications for home security.

"Seniors often feel isolated from friends and family," says Stan Ciepcielinski, founder of SEI-TEK and the inventor of Savi. "Simple, easy, intuitive technology is our mission. We believe technology should be accessible to people of all ages." And that, says Ciepcielinski, is why his company develops solutions to help seniors and "technologically wary individuals" stay connected.

Mobisoft Infotech and SEI-TEK partnered to launch a Kickstarter campaign early this month with the goal of raising about $100,000 to complete apps for the Savi tablet. Kickstarter allows every-day consumers to fund creative and technological projects by contributing funds online. SEI-TEK plans to launch Savi by the fall of 2014.

To learn more or see the Savi video, go to www.Kickstarter.com or www.sei-tek.com.