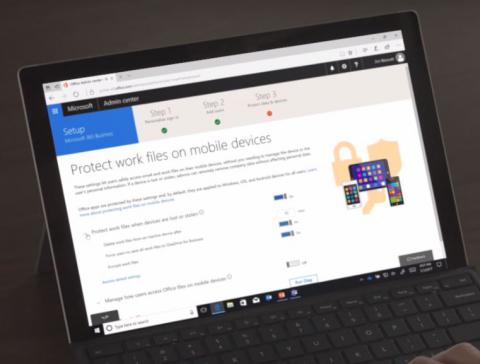 Enhancements to the productivity, security, and management suite include anti-phishing and ransomware features, data loss prevention functionality, and the ability to enforce the use of Microsoft’s BitLocker encryption technology on all Windows devices. By Rich Freeman
Tweet

Microsoft has expanded the threat and data protection capabilities of Microsoft 365 Business, the SMB-focused edition of its integrated productivity, security, and management suite.

The new features include scanning and analytical tools, powered by artificial intelligence technology, that are designed to keep phishing and ransomware attacks away from end users by detecting and blocking dangerous messages and attachments.

An enhancement to Outlook seeks to provide further protection for confidential data by allowing organizations to set and enforce access policies, such as a rule barring users from forwarding, copying, or pasting unencrypted data. Administrators required to comply with data retention regulations can now establish email archiving and preservation policies as well.

Finally, companies looking to mitigate the risks associated with lost and stolen devices can now force all endpoints to use the Windows operating system’s built-in BitLocker encryption service.

Introduced during the Microsoft Inspire partner conference last July and made generally available in October, Microsoft 365 Business is designed for companies with up to 300 users. It combines the Business Premium edition of Microsoft Office 365 with a custom-developed bundle of security, mobile device management, and administration tools.

Microsoft 365 Enterprise, a second version of the solution that combines the Enterprise edition of Office 365 with Microsoft’s Enterprise Mobility + Security suite and Windows 10 Enterprise operation system, is designed for larger businesses.

According to Microsoft, small and midsize businesses both want and need security safeguards of the kind announced today. Over half of SMBs collect social security numbers and 29 percent handle bank account information, according to results of a poll the company recently conducted, yet just 41 percent of SMBs say they can remove data from a lost or stolen device remotely, and only half use email encryption.

Not surprisingly, given such statistics, 71 percent of respondents to Microsoft’s poll—climbing to 87 percent for businesses that have already experienced a breach—deemed themselves vulnerable to a cyberattack.

The new threat protection, archiving, and Outlook information protection features introduced today are available immediately to new Microsoft 365 Business buyers and will gradually reach existing users in the next several weeks. The data loss prevention functionality, along with features dependent on Office desktop applications, will roll out in the coming months, Microsoft says.

Microsoft 365 has been selling briskly since its launch, according to Renee Bergeron, senior vice president of global cloud at Irvine, Calif.-based distributor Ingram Micro Inc.

US Signal Launches Vulnerability Management as a Service
November 10th, 2020

The Road to Success Is Paved with Service
END_OF_DOCUMENT_TOKEN_TO_BE_REPLACED

Jabra PanaCast Review - Get Your Huddle On
END_OF_DOCUMENT_TOKEN_TO_BE_REPLACED