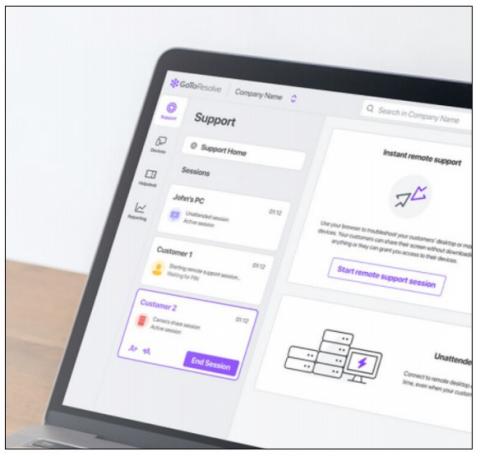 Now named GoTo, the company has ambitious plans to market a simplified portfolio of integrated remote management and unified communications solutions through a dramatically expanded set of partners, including MSPs. By Rich Freeman
Tweet

In what it’s describing as a complete corporate overhaul, LogMeIn has rolled out a new name, new partner program, and new remote support solution.

Drawing on the familiar monikers of its GoToMeeting conferencing solution and GoToConnect cloud phone system, the company will now be called GoTo.

GoToConnect (which includes GoToMeeting) and the new remote management tool, named GoToResolve, will be the core elements of a simplified product portfolio. Per plans announced last December, GoTo’s LastPass password management unit (which has been targeting MSPs since last summer) will split off from its corporate parent to become a standalone business.

Equipped with shared administration and a common user interface, the dual GoTo platforms will form an increasingly integrated suite for SMBs and other businesses with hybrid office/home workforces, according to Patrick McCue, global vice president of global partners for GoTo and LastPass.

“We see it as a differentiator against some of the competitors that we might have out there,” he says. “Some of them are just truly a meeting platform or just a phone system or just remote desktop. By rebranding all of this, we know that businesses can look at us as a full platform.”

Partners will benefit as well from the ability to source three widely needed tools from one supplier, McCue continues. Members of GoTo’s former partner program, most of whom are telecommunications agents and sub-agents, will also gain access to a new potential revenue source, he adds. “We really want to leverage that network of partners we have to be able to sell the remote desktop as well as the GoToMeeting and webinars as kind of a bundle.”

GoTo’s revamped partner program, called the GoTo Partner Network, will include tracks for MSPs and distributors in addition to the company’s legacy base of communications-oriented resellers. “We historically haven’t really worked with IT providers,” McCue says, noting that a specific list of benefits and requirements for MSPs is scheduled to arrive toward the middle of the year.

Unlike its predecessor, the GoTo Partner Network will be a global offering with a formalized tiering system designed to reward high-performing members. “Some of our top-tier partners now will have access to a dedicated support team, a dedicated onboarding team, and a dedicated provisioning team,” McCue explains. The new program will provide additional MDF, host partner summits, and maintain partner advisory boards as well.

The system supports PCs and Macs, as well as mobile hardware running iOS or Android and Chromebooks. It also comes with a zero-trust security architecture designed to require secondary verification of identity from all users, applications, and devices.

GoTo plans to roll related products like GoToMyPC and Rescue into the new solution over time. “GoToResolve is going to basically take all of those into one product, one platform, and one go to market,” McCue says. Expanded remote monitoring and management features, endpoint security capabilities, and IT management integrations are set to arrive in coming months as well.

The MSP’s Role in Solving the IT Skills Gap
Best IT Certifications for Beginners
Bridging the Skills Gap: Funding Skills Programmes
END_OF_DOCUMENT_TOKEN_TO_BE_REPLACED