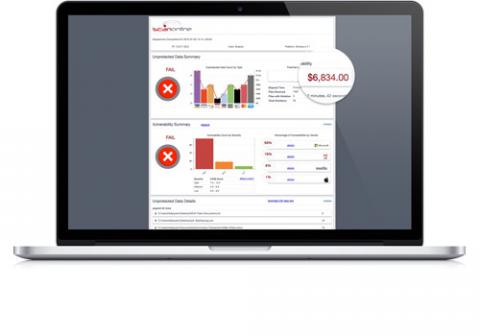 LOGICnow, of Dundee, Scotland, has added MAX Risk Intelligence, an online vulnerability scanning and risk assessment solution, to its product roster. The new system is based on technology the managed services software maker acquired along with iScan Online Inc., of Plano, Texas, in late January, a transaction first revealed today. Terms of that deal have not been disclosed.

Available immediately both as a stand-alone product and as an integrated component of LOGICnow’s MAXfocus RMM tool, MAX Risk Intelligence automatically locates sensitive information on an end user’s network, identifies security weaknesses that could give hackers unauthorized access to that information, and calculates the potential financial impact of a data breach, using industry-standard breach cost estimates from experts such as Ponemon Institute LLC.

“It paints a very good story not only for onboarding new customers but helping to retain customer value in the MSP channel,” says Carl Banzhof, formerly iScan’s CEO and now LOGICnow’s vice president of engineering for security. The system also shows MSPs which risks pose the greatest danger and deserve the most immediate attention.

“It helps the MSP really prioritize where they’re going to get the biggest bang for their buck as far as remediation actions go,” Banzhof says.

“The technologies that were on the market weren’t really conducive to small businesses,” Banzhof says. “They required a lot of technical expertise and a lot of infrastructure that just didn’t exist.”

Over time, the company added the ability to locate protected data and assign a dollar value to potential breaches, turning what started out as a vulnerability scanner into a more holistic risk assessment solution. It also broadened its focus beyond the PCI market and began selling directly to MSPs.

LOGICnow initiated the process of linking MAX Risk Intelligence and MAXfocus immediately after the iScan acquisition closed last month, and has been scrambling to complete that work ever since. “We’ve been working feverishly to do some integration,” Banzhof says.

There’s more to come from LOGICnow on the security front as well, he adds. The company isn’t ready to discuss details yet, but will release a roadmap outlining its security vision at some point within the next quarter. According to Banzhof, those plans are likely to include a tie-in to LOGICnow’s LOGICcards predictive analytics solution, which uses RMM data collected anonymously from over 12,000 MSPs around the world to spot potential maintenance issues before they occur.

“Stay tuned,” he says. “We have kind of the ability to feed the LOGICcards system with some intelligence based on this technology.”