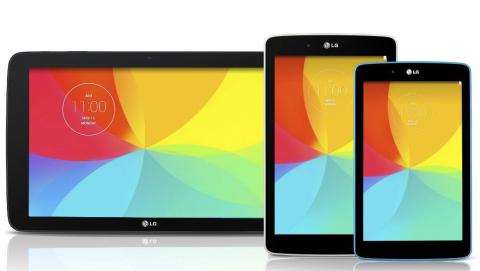 The G Pad 8.3 becomes part of a family of tablets with the addition of 7-, 8-, and 10-inch siblings. By Cecilia Galvin
Tweet

Today South Korean electronics giant LG was big with its announcement but small on details. The company says it’s adding three new tablets to its G Pad series: the G Pad 7.0, G Pad 8.0, and G Pad 10.1 (corresponding to screen sizes) “to offer more options for tablet users.” These siblings join the G Pad 8.3 that was announced at the end of last year.

The company officially unveils the tablets at the MedPI 2014, a large European trade show that starts tomorrow in Monaco and runs through May 16. Still, LG isn’t known for releasing all the details of its products at once, and says we’ll learn more “in the weeks ahead.”

LG does say, however, that the tablets will include its proprietary QPair 2.0 and Knock Code. QPair, already part of G Tab 8.3, lets users connect their Android smartphones to the tablets via Bluetooth to get notifications of calls and messages. Now, with version 2.0, users can actually answer those calls and messages via the new tablets. Knock Code enables users to power on and unlock their devices by entering a personalized “knock” pattern of two to eight taps anywhere on the screen, and with the display on or off.

For details on processors, memory, storage, and the like, we’ll just have to stay tuned.

ICYMI: Our Channel News Roundup for the Week of July 6th
END_OF_DOCUMENT_TOKEN_TO_BE_REPLACED