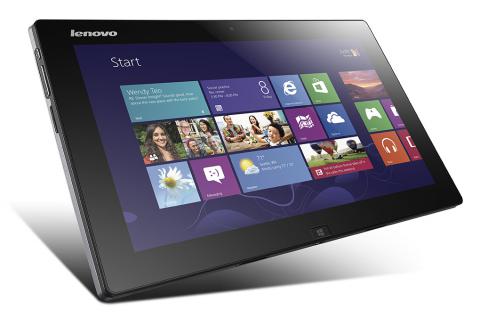 Lenovo is getting giddy with its new products designed for use with Windows 8. OK, the company is getting us giddy -- especially with releases like the IdeaTab Lynx.

The IdeaTab Lynx is a new Windows 8-based tablet with a dual-core 1.8GHz Intel Atom processor. It also comes packing a very pretty 11.6-inch 1366 x 768 IPS display, up to 2GB of RAM and up to 64GB of storage, depending on what you want and what you're willing to pay.

However, the real hook on this tablet is that it has sort of a split personality. It has a touchscreen, which is nice when you're in the airport, on the couch or just on the go. However, when it's time to get productive, you can dock the unit to a keyboard for the full PC experience.

And when we say the “full” experience, we're talking about those times when you need to work in Microsoft Word or Excel, as well as when you want to create a little PowerPoint presentation. You know, the fun stuff. That said, this is certainly a nice little option for those of us not entirely sure whether to go with a tablet or a computer.

The IdeaTab Lynx also has plenty of other perks, including an incredible 16 hours of battery life -- if you're using that keyboard. (It actually doubles the stand-alone tablet's 8 hours!) Other features include Dolby Home Theatre sound, Bluetooth 4.0, 802.11b/g/n WiFi, two digital microphones, a 2-megapixel webcam, and a Gyro sensor. There are also options to add in other devices, via micro-USB and micro-HDMI ports and a microSD card. It's not all “micro” though, since the keyboard has two full-size USB ports for connecting hard drives, printers and other accessories.

Lenovo says that the IdeaTab Lynx will be available sometime in December. The starting price will be $600, which doesn't include any tweaks or that keyboard add-on, which you can expect to run you another $150.

Acronis Adds Advanced File Sync and Share Pack to Cyber Protect Cloud
How Would You Rate Your Help Desk?
END_OF_DOCUMENT_TOKEN_TO_BE_REPLACED

Jabra PanaCast Review - Get Your Huddle On
END_OF_DOCUMENT_TOKEN_TO_BE_REPLACED