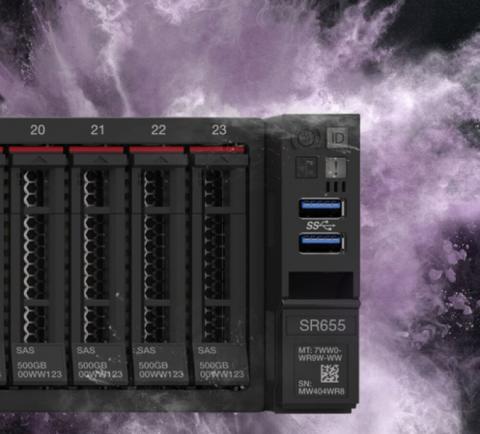 Lenovo has introduced two single-socket servers for use in edge computing scenarios.

The Lenovo ThinkSystem SR635 and SR655 are designed to provide the performance of a dual-socket server at the cost of a single-socket. Both are powered by AMD EPYC 7002 Series processors and optimized for evolving, data-intensive workloads such as video security, software-defined storage, and network intelligence, as well as support for virtualized environments. The result, according to Lenovo, are solutions that provide power and efficiency to customers who place a premium on balancing throughput and security with easy scalability.

“Lenovo’s endless pursuit of innovations to accelerate our customers’ intelligent transformation has been paramount in our rise to become one of the fastest growing data center OEMs in the world,” said Doug Fisher, chief operating officer and senior vice president of business units for Lenovo's Data Center Group, in a media statement. “Today Lenovo is expanding our AMD relationship with new, fully optimized solutions to help our joint customers address complex and data-intensive workloads, enabling them to do more with less while still providing uncompromised end-to-end security.”

According to Lenovo, the ThinkSystem SR635 and SR655 server platforms offer up to 73 percent savings on software licensing, empowering users to accelerate emerging workloads more efficiently. Additionally, customers can realize an up to 46 percent reduction in total cost of ownership. The new servers have set 16 world records as well, including two for energy efficiency.

The Lenovo ThinkSystem SR635 and SR655 are engineered to provide more throughput, lower latency, and higher core density, as well as the largest NVMe drive capacity of any single-socket on the market. They can also serve as a platform for hyperconverged infrastructure solutions, allowing Lenovo to offer customers vSAN and other certified nodes and future ThinkAgile software-defined appliances for simple deployment, management, and scalability.

A new forecast from IDC estimates that there will be 41.6 billion connected Internet of Things devices, generating 79.4 zettabytes of data, by 2025. Much of the growth will be driven by edge and video security technology. Lenovo’s new solutions are intended for use cases where more computing power is needed in confined spaces, using less energy, such as video security for public safety in smart city, campus, and mass transit environments. Governments and other public safety organizations are tasked with monitoring these environments, swiftly and accurately identifying potential threats and responding quickly. The Lenovo ThinkSystem SR655 coupled with Pivot3’s software aims to provide an edge computing video security solution capable of supporting up to 33 percent more video cameras per node than similar solutions. With the increased bandwidth of PCIe 4.0, supported by the 2nd Gen AMD EPYC processors, Lenovo says, customers get faster data transfer from the edge to the core, and greater storage capacity permitting quicker recall of video for recognition and analysis.

“The combination of Lenovo’s quality and resilience and the breakthrough performance of the 2nd Gen AMD EPYC processor deliver what our customers need to support their mission critical deployments,” said Bruce Milne, Pivot3's vice president, chief marketing officer, and general manager, in prepared remarks. “As Pivot3 customers expand their use of intelligent infrastructure for safe airport, campus, hospitality, and transportation use cases, security, resilience, and management simplicity at scale are critically important. AMD and Lenovo allow us to deliver all of that and to delight our customers.”

In virtualized environments, organizations often have to decide between maximum performance and security. The hardware-assisted VM and memory encryption security features of the AMD EPYC 7002 Series processors combined with Lenovo ThinkShield solutions is meant to solve this dilemma by utilizing an extra layer of security for virtualization that isolates and minimizes threats in the data center. Moreover, because the VM encryption resides in the hardware as opposed to the software or hypervisor, they do so without compromising on system performance. Security is also of the utmost importance in video analysis and public safety scenarios. New features in the Lenovo servers like a physical intrusion switch can detect and prevent tampering.

Allot, a global provider of network intelligence and security solutions for communications service providers and enterprises, has been eagerly anticipating Lenovo's latest servers due to their ability to handle data-intensive workloads. “Lenovo’s integration of next generation I/O and processing technology gives Allot the ability to manage more network bandwidth at higher speeds, allowing us to pull actionable insights from increasingly heavy traffic without any degradation in performance,” said Mark Shteiman, acting vice president of product management at Allot, in a press statement. “The communication service providers and enterprises we support need to see and react to their network needs in real time. We evaluated Lenovo’s ThinkSystem SR635 and SR655 server platform prototypes and were immediately impressed.”

The new Lenovo ThinkSystem SR635 and SR655 solutions are available now through Lenovo sales representatives and channel partners across the globe.

ChannelPro Weekly Podcast: Episode #225 - Tech Babysitters
How To Learn about Information Technology on Your Own
END_OF_DOCUMENT_TOKEN_TO_BE_REPLACED