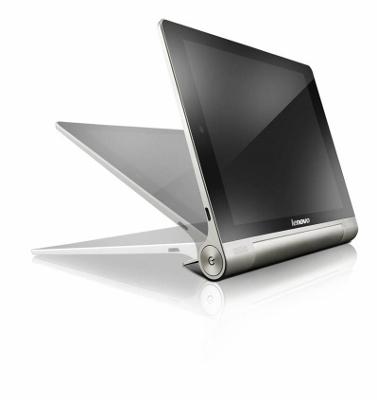 Just in time for Halloween, the mad scientists at Lenovo genetically combined Yoga with Android to make some kind of unholy super-tablet with 18 hours of battery life. By ChannelPro
Tweet

Lenovo just unveiled its latest addition to the its multimode family of transformable PCs. The new Android-based Yoga Tablet features three modes -- hold, tilt, and stand -- giving consumers a better way to use a tablet. Lenovo designers and engineers focused on three challenges tablet users face: fatigue when holding and using the tablet; no self-supporting mechanism when laid on a flat surface; and an inadequate viewing angle when set on a table. These scenarios inspired Lenovo to design and create Yoga Tablet's modes.

Tablet Modes
With its cylindrical handle, hold mode is designed to fit an individual's hand and offers more control over the device. Hold mode allows users to read, check social media, and browse the Web.

To convert the tablet into stand mode, rotate the side cylinder 90 degrees so that the tablet stand deploys, allowing the tablet to stand by itself on a desk or table. Users can change the viewing angle to fit what's comfortable for them from 110 to 135 degrees. Stand mode allows users to comfortably watch movies, place video calls, and interact with the ten-finger touchscreen without having to rely on add-on accessories.

Lay the tablet down in tilt mode to type directly on the tablet, play games, and surf the Internet with a better viewing angle. There's also auto-detection software that can automatically brings up frequently used apps in hold and stand modes.

Battery Life and Other Features
The Yoga Tablet offers a longer battery life of up to 18 hours by using batteries typically found in laptops, and also has the ability to charge other devices such as smartphones via its USB on-the-go feature. The 10-inch and 8-inch models are loaded with Android 4.2, and run on MT8125 Quad Core processors with 16 GB of storage.

Both models weigh in at 1.34 lbs. for the 10-inch model and 0.88 lbs. for the 8-inch model. They feature high definition 1280 x 800 displays, a 5 MP auto focus rear camera, and an additional front camera. They also include a micro SD expansion slot (allowing up to 64 GB of total storage), WiFi, micro USB connection, and Dolby DS1 for rich audio through the front-facing speakers. Lenovo offers an optional Bluetooth keyboard for the 10-inch model that functions as a cover and even wakes up the tablet when it's removed and puts the tablet to sleep when it's attached.