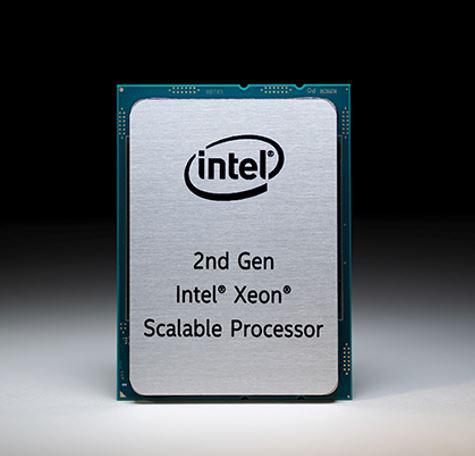 Intel has shipped an extensive family of processors, storage components, field programmable gate arrays, and other products designed to help it and its partners capitalize on burgeoning demand for cloud and other data center workloads as well as growth in emerging markets such as the Internet of Things, artificial intelligence, and 5G networking.

The new offerings include a portfolio of 2nd-Generation Intel Xeon Scalable processors, more than 50 workload-optimized processors, and Intel’s storage-class Optane DC persistent memory technology. Collectively, those systems represent the latest and most ambitious step in Intel’s campaign to take on what it calls a $300 billion data center opportunity.

Enhancements in the new Xeon Scalable CPUs released today include a feature called Deep Learning Boost that according to Intel accelerates artificial intelligence inference workloads such as image recognition and object detection by up to a 14x. New hardware-enhanced security features include side channel protections that establish a hardware root of trust from boot to runtime. An enhanced edition of Intel’s Infrastructure Management Technologies is designed to optimize utilization of data center infrastructure resources.

2nd-Generation Xeon Scalable processors also support the Optane DC persistent memory that Intel unveiled today, which is designed to overcome what Shenoy described as one of the industry’s greatest memory and storage-related challenges.

“DRAM doesn’t support the capacity that application developers need. It doesn’t allow for persistence where the data continues to be stored when the power goes out. And NAND doesn’t provide the speed that the data-centric world we live in today demands,” he said.

According to Intel, Optane DC persistent memory can reduce system restarts from minutes to seconds and support up to 36 percent more virtual machines. When combined with DRAM, the new technology delivers up to 36TB of system-level memory capacity, a 3x increase over the first Xeon Scalable generation.

Other newcomers to the Optane family introduced today include the Intel Optane SSD DC D4800X, a dual-port solid-state drive designed to support multiple data paths for high availability, and the Intel QLC 3D NAND SSD D5-P4326, a quad-level cell SSD in a ruler-shaped form factor that according to Intel enables a 20x storage rack consolidation.

Purpose-built additions to the Xeon Scalable line include the Intel Xeon Platinum 9200, a 56-core, 12 memory channel chip intended for use in high-performance computing hardware, and the Intel Xeon D-1600, a compact system on chip with up to eight cores designed for use in edge computing solutions and other settings where space is tight and power scarce. Workstation SKUs debuted today as well for heavily-threaded, I/O-intensive applications in the architecture, engineering, construction, media, and life sciences verticals, among others.

Also new from Intel is the Agilex field programmable gate array, a 10nm platform designed for use in edge computing, 5G networking, and other applications demanding flexibility and customizability, and the Intel Ethernet 800 Series adapter, which provides up to 100Gbps port speeds to cloud data centers, communication service providers, and large businesses with massive volumes of data to move.

The Intersection of Hybrid Cloud and Identity
END_OF_DOCUMENT_TOKEN_TO_BE_REPLACED

Jabra PanaCast Review - Get Your Huddle On
END_OF_DOCUMENT_TOKEN_TO_BE_REPLACED