Ingram Micro to Partners: Join Our Ecosystem of Cloud 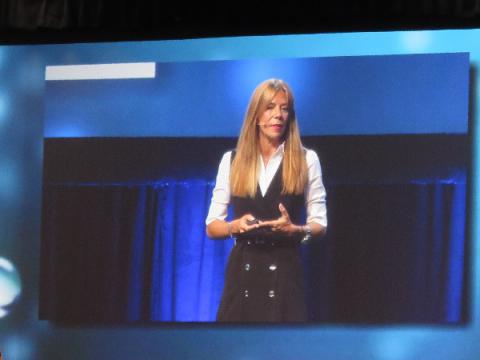 Executives from Ingram Micro Inc., of Irvine*, Calif., used keynote addresses at today’s opening session of the Ingram Micro Cloud Summit, in Phoenix, to emphasize the ways cloud computing is radically changing the IT landscape, and to announce tools aimed at helping partners navigate those changes successfully.

In the cloud era, speakers noted, technology solutions are increasingly purchased on a self-serve basis by decision makers outside the IT organization. Most of those buyers research solutions without a technology partner’s help, often on a smartphone or other mobile device, and often in response to information they acquired via social media solutions such as Twitter.

"There’s no going back to the way technology was distributed in the past,” said Ingram Micro CEO Alain Monie. “This is here to stay.”

Renee Bergeron, Ingram Micro’s vice president of global cloud computing, agreed. “It’s a new era,” she said. “If you want to be successful you will need to connect to these new buyers.”

To help partners do exactly that, Ingram Micro introduced what it calls its “ecosystem of cloud,” a collection of partners, tools, and technologies aimed at helping vendors, resellers, hosters, and other partners sell cloud solutions to businesses of every size, then provision, manage, and collect payment for them.

“The Ingram Micro ecosystem of cloud is your fast pass to cloud success,” Bergeron said.

As reported earlier by ChannelPro-SMB, Ingram Micro rolled out key components of that ecosystem today, including new service automation tools and online storefronts aimed at enabling partners to offer solutions from Ingram Micro’s cloud marketplace on a white-label basis via their own websites. Based on the Odin service automation code base that Ingram Micro acquired from Parallels IP Holdings GmbH last year, those offerings are designed to provide a flexible mix of options to the distributor’s diverse channel, which includes partners with varying degrees of sophistication and commitment to building a cloud practice.

“One size doesn’t fit all. With Ingram you can select the platform that best fits your business model,” Bergeron said.

All of those platforms empower partners to bundle and provision solutions from multiple providers, manage them all as a single solution, invoice them on a consolidated basis, and get single-point-of-contact support from Ingram Micro technicians.

According to Bergeron, that ability to assist partners across the entire cloud service lifecycle, along with the substantial investments in cloud-related capabilities and acquisitions the company has made in recent years, separates Ingram Micro from its competitors. “No one can come close,” she said.

Monie made clear that Ingram Micro sees its ecosystem of cloud as a work in progress just the same. “We’re going to continue to invest,” he said, adding that selling the company to Chinese shipping and logistics conglomerate Tianjin Tianhai Investment Co. Ltd. for $6 billion in February put the distributor in a stronger position to do so, as it gives the company greater access to capital while freeing it from the need to meet the short-term expectations of investors and Wall Street analysts.

“I only see positive changes,” said Monie of Ingram Micro’s new ownership, in some of the first public comments he’s made about the transaction since it was announced.

As expected, Bergeron used her keynote to address Ingram Micro’s recent purchase of San Jose, Calif.-based cloud marketplace provider Ensim Corp., which she said would close in the coming months.

“This latest acquisition will help Ingram Micro further expand the ecosystem of cloud to include another leading marketing focused on cloud consumption,” she said. Few channel pros are likely to benefit from the addition of that cloud commerce platform, however, as Bergeron described it is especially useful for selling to large enterprises.

Even so, Monie encouraged SMB partners along with the rest of Ingram Micro’s channel to make building a cloud business their top priority.

“You either jump on this train or you don’t,” he said. “It’s your choice.” Those who choose not to, however, are putting their future at risk.

* Corrected from original version, which incorrectly identified Ingram Micro headquarters as being in Santa Ana, Calif.