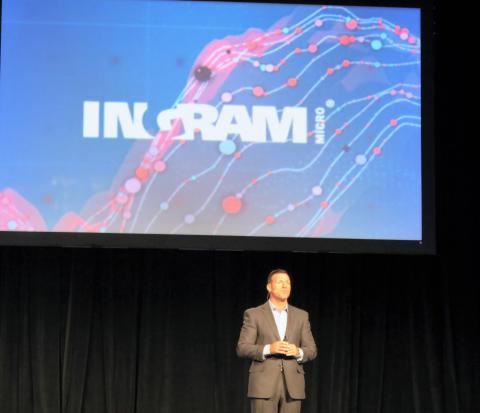 At its ONE event in Las Vegas, senior executive Paul Bay (pictured) said Ingram Micro’s pending acquisition by an overseas shipping giant is on track and will help resellers capitalize on opportunities in cloud computing, big data, and the Internet of Things. By Rich Freeman with Joel Zaidspiner
Tweet

Fear not, Ingram Micro told attendees at the 2016 edition of its ONE partner event today. Our business may be changing as rapidly and dramatically as IT itself, but we’re as focused as ever on helping you transition into the next age of computing.

“Our strategy is not changing,” said Paul Bay, Irvine, Calif.-based Ingram Micro’s executive vice president and president for the Americas, during a morning keynote. “We’re not going to be distracted.”

The potential distraction in question, of course, is the $6 billion purchase of Ingram Micro this February by Tianjin Tianhai Investment Co. Ltd., a Chinese shipping and logistics giant whose largest shareholder is Hainan-based conglomerate HNA Group.

That transaction is rolling forward smoothly, Bay assured his audience, and cleared a critical hurdle a month ago when it won approval from the federal government’s Committee on Foreign Investment in the United States, which is responsible for reviewing overseas acquisitions of U.S. companies with potential national security implications.

“Now the doors are open to move forward,” Bay said. And that means business as usual for Ingram Micro resellers, he added, with one important difference.

“Now there’s going to be a $100 billion business standing behind you,” Bay stated.

Ingram Micro plans to put some of that money toward corporate acquisitions of its own, as well as other moves aimed at helping solution providers navigate the ongoing transition to a new era of computing defined by rapidly growing markets like cloud computing, big data, and the Internet of Things.

“We’re going to continue to make bold moves,” Bay said, pointing to the distributor’s purchase of value-added unified communications and collaboration distributor NETXUSA Inc. in March as a representative example. By sharing knowledge of VoIP solutions and IP phones that most resellers lack, he continued, NETXUSA has already helped Ingram Micro partners collect “millions and millions of dollars” they might otherwise have left on the table.

Internet telephony is but one example of many next generation technologies that require specialized expertise to sell and support. Their complexity makes selling and supporting them difficult, Bay notes, but also positions partners with the right capabilities to do more for their customers and charge more for their services.

“That complexity puts you right in the driver’s seat to make more money,” he said.

Investments like the NETXUSA acquisition or the cloud storefronts Ingram Micro introduced in April, Bay continued, are part of the distributor’s ongoing effort to give resellers the solutions, sales assistance, financing programs, professional services, and other resources they need to meet any requirement their customers have, even if those are on the leading edges of IT.

“That’s ultimately the battle cry that we have,” he said. “Never say no. We want to arm you with the ability to never say no.”

Without providing specifics or examples, Bay suggested there are more steps to come toward the realization of that goal after Ingram Micro officially joins forces with its new owner.