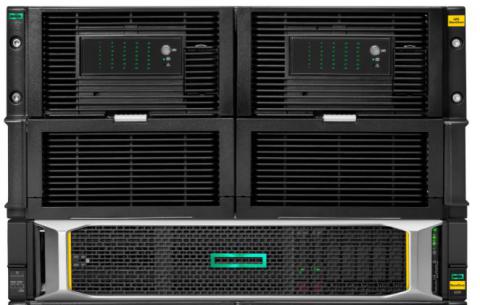 A new set of faster StoreOnce backup appliances, which now integrate with both the vendor’s Nimble storage arrays and software from Commvault, are available on a pay-as-you-go basis through HPE’s GreenLake Flex Capacity program. By Rich Freeman
Tweet

Hewlett Packard Enterprise has introduced an upgraded set of StoreOnce backup appliances, integrated those systems with both its Nimble storage arrays and storage software from Commvault Systems Inc., and made all those offerings available at consumption-based rates through its GreenLake Flex Capacity financing program.

Available now at price points starting at starting at $4,800 and capacities beginning at one terabyte, the new HPE StoreOnce devices offer significant performance, capacity, and manageability improvements, and can reduce operational effort by as much as 95 percent, according to Patrick Osborne, HPE’s vice president of secondary storage and big data product management.

According to Osborne, the new functionality, which was already available for HPE’s 3PAR storage products, enables Nimble users to backup data approximately 23 times faster and recover it about 15 times faster. “You get very, very fast, very efficient backups,” he says.

RCM 6.0 is scheduled to ship in December, at which point it will come standard with both 3PAR and Nimble storage systems.

“They’re able to utilize the full data compaction capability of the StoreOnce, and then integrate with our primary storage,” Osborne says.

Effective immediately, all of the new products announced today—including Commvault’s software—are available at subscription-priced, pay-as-you-go rates via GreenLake Flex Capacity program. That helps cash-strapped SMBs in particular, Osborne notes, turn storage from a capital expense into an operating one.

“You pay per month, per capacity, and we can take that whole solution and give it to a customer as backup as a service,” Osborne says. “That’s a big advantage for a smaller customer who doesn’t want to pay all that cash outlay upfront.”

HPE opened GreenLake Flex Capacity to partners in June and introduced new rebates that reward resellers for closing GreenLake deals two months later. According to Osborne, all of HPE storage products will eventually be available through the GreenLake program.

StoreOnce is the core element of a secondary storage strategy aimed at helping businesses both embrace hybrid cloud storage strategies and glean more value from backed up data.

“Having some data on-prem for test in depth and rapid restore, and then moving that data off and archiving it to the cloud is a very popular use case,” Osborne says.