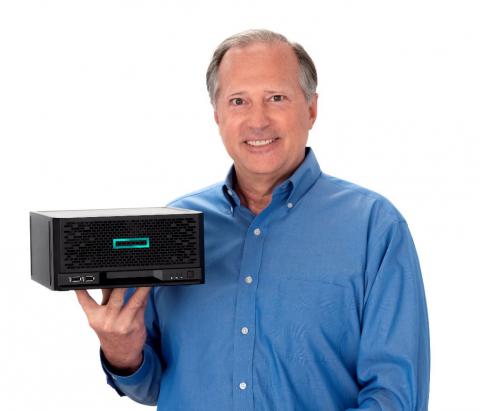 The new server (pictured), which is about the size of a hardcover book, comes with an extensive selection of management software, HPE’s “silicon root of trust” security technology, and optional as-a-service pricing that starts at less than $20 a month. By Rich Freeman
Tweet

Hewlett Packard Enterprise has shipped an enhanced edition of its ProLiant MicroServer Gen10 product for small office and edge locations.

The new HPE ProLiant MicroServer Gen10 Plus, which updates a product originally introduced in 2017, is the first version of the system to offer an as-a-service purchasing option in addition to traditional capital expense pricing.

Like its predecessor, the new ProLiant MicroServer Gen10 features a compact footprint optimized for use in remote sites with limited room for IT gear. Weighing in at about 10 pounds, the device measures 9.65” x 9.65” x 4.6”, making it over 2X smaller than the product’s earlier generation.

To further accommodate the needs of users without server closets or other places to hide noisy hardware, the unit is engineered to operate at 36 decibels. “The design spec was a public library,” Peters says. “How do we keep it more quiet than a public library?”

The main technique employed to reach that target was excluding an onboard power subsystem from the product. “It’s exactly like your AC adapter on your laptop. You have the cord and the brick on the outside,” Peters says, noting that this arrangement allows the device to run safely without a fan.

Together, he continues, the product’s small size and quiet operation make it “as close to invisible as possible,” which is exactly what a small business owner or branch office manager demands. “I want to keep it out of sight and hide it, and no sound,” Peters says.

The device also comes with up to 32GB of RAM and up to 16TB of internal storage.

To meet end user expectations for security, the system features HPE’s “silicon root of trust” technology, which is designed to lock out firmware-level exploits and malware from the factory to production deployment.

Included as well in the product is HPE’s InfoSight for Servers solution, which utilizes artificial intelligence and predictive analytics to anticipate and prevent hardware issues. Available to SMBs for the first time in this device, the system displays status information on a “server wellness dashboard” and can make proactive recommendations for eliminating performance bottlenecks and other issues.

A special edition of HPE’s Integrated Lights Out (iLO) monitoring and management tool, also included with the server, comes with partitioned remote control functionality separate from the rest of the offering. “That allows us to give partners the ability to sell that as a service,” Peters notes.

For the first time, users can employ HPE’s Rapid Setup software to install and configure the unit in what Peters says is 35% less time than would otherwise be required, and with less onsite expertise. “It allows them to deploy these systems without being there and working with someone at the customer’s side, or by sending a junior tech at a much lower cost than their more senior techs,” Peters says.

Jabra PanaCast Review - Get Your Huddle On
END_OF_DOCUMENT_TOKEN_TO_BE_REPLACED