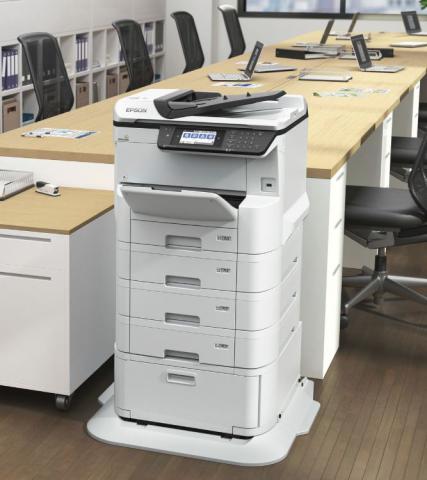 The new products hold up to 1,830 pages and print 24 ISO pages per minute with what Long Beach, Calif.-based Epson says is no warmup time. They also consume 66 percent less energy than the models they succeed, thanks principally to upgrades in Epson’s PrecisionCore print head technology.

Nozzle verification debuted last March in the company’s WorkForce Enterprise WF-C20590 product and subsequently appeared in the WorkForce Pro WF-C869R, a color workgroup printer with a replaceable ink pack. According to Marsic, it will shortly be available in forthcoming monochrome printers as well.

Other enhancements in the WF-C8000 series include support through the media cassettes for thicker paper. In previous models, any paper heavier than 90gsm had to be inserted through the rear feeder. The new units raise that figure to 200gsm.

“That allows people who are printing this higher quality media to do higher-end jobs with the same quality they expect through the rear feed,” Marsic observes, pointing to businesses in the architecture, construction, and engineering verticals as likeliest to benefit from that change.

Both devices support the PCL and PostScript 3 standards and are compatible with third-party solutions such as Nuance Equitrac Office/Express, Nuance eCopy ShareScan, PaperCut, and nddPrint. Built-in security features include PIN number certification for job release as well as support for SSL, TLS, and IPsec encryption.

Epson last refreshed its A3 color inkjet portfolio in February when it introduced the more modestly-scale, lower-priced WF-C5000 series.