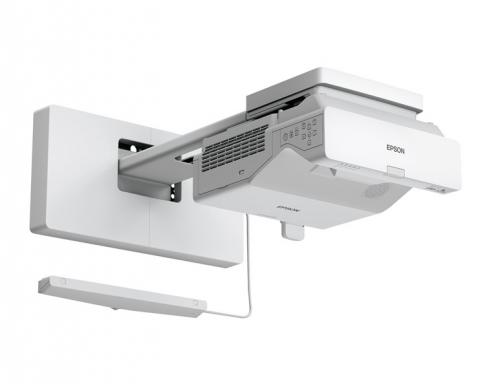 Included among the forthcoming products are an “extreme short throw” device capable of displaying an 80-inch image from as close as one inch away and a browser-based unit for classrooms that projects straight over the web without a PC or Mac connection. By Rich Freeman
Tweet

Epson America has unveiled 12 additions to its BrightLink and PowerLite lines of lamp-free laser projectors.

Both the three new BrightLink interactive models and nine new PowerLite non-interactive models are tailored to the needs of “multimodal” classrooms and digitally transformed conference rooms with an expanded set of requirements to satisfy, according to Yanni Wang, a product manager at Epson.

Included among the PowerLite devices is the new EB-810E Ultra, a 5,000 lumen 4K “extreme short throw” projector capable of displaying an 80-inch image in a wide 21x9 format on a wall or other surface from as close as one inch away, or a 160-inch image from just 14 inches. According to Wang, conference rooms at hybrid workplaces need that “larger canvas” to accommodate a diverse and growing mix of content.

The new product comes ready-made for use in Microsoft Teams Rooms as well. “The microphones and the cameras are all synchronized so that when you speak, it’s going to highlight the person that’s talking,” says Epson Product Manager Tom Piche. “You actually get the feel that you’re in the same room with that person.”

All of the new PowerLite units are set to ship in March except the EB-810E Ultra, which is due in June.

Meant primarily for use in K-12 classrooms, the BrightLink GoBoard 780Fi is a browser-based unit designed to let teachers project 1080p images without first attaching a laptop or other computer.

“Turn it on and it’s ready to go and interact with,” Piche observes. “Teachers have told us over and over again that technology can’t be complex when you’re trying to deal with 30 kids in a classroom.”

Equipped with a built-in whiteboard, he adds, the device turns any flat surface into “a giant interactive tablet.” Other new BrightLink models introduced today include similar functionality.

All of the BrightLink devices, which are due in March, are compatible with Microsoft 365 and Google Classroom and integrate with Macs, PCs, document cameras, digital media players, DVD players, and other classroom technologies. They come with two interactive pens as well, plus a separate add-on module that supports up to six points of touch. Connectivity options include three HDMI ports, wired and wireless networking, Miracast, and powered USB.

According to Epson, laser projectors like the BrightLink and PowerLite families are light, compact, flexible alternatives to heavier flat panel displays. They also project significantly larger images than the 75-inch flat panels many organizations use today, the company says.

The global conference room solutions market will climb at a 13% CAGR through 2030 to over $3.2 billion, according to Astute Analytica. The federal government’s Elementary and Secondary School Emergency Relief Fund, meanwhile, gives K-12 schools until September 2024 to tap into some $190 billion in stimulus funding for classroom technology.