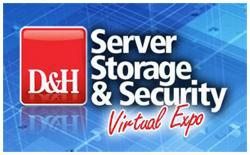 Distributor aims to provide VARs with skills for selling servers, storage, and security to SMBs, and better position them for future incremental revenue. By Admin
Tweet

D&H Distributing says it is "broadening its focus on SMB server technologies."

Steering VARS toward what it believes to be a "profitable category niche," D&H is hosting a springtime virtual event geared toward SMB server sales. The all-day event, entitled "D&H Server, Storage and Security Expo: The Backbone of SMB IT" will take place Thursday, Feb. 11.

In a press release to EH Publishing, D&H says the event is designed to help train its resellers in the ways of selling SMB server solution in order to then help secure incremental infrastructure business. Since the introduction of a server invites the integration of a whole suite of technologies, D&H believes server-less environments typically present opportunities to build entire infrastructures with new capabilities and efficiencies for those SMB offices.

Despite some industry reports that have given mixed reviews about the performance of the server market, D&H Distributing says its SMB customer bases has demonstrated significant strength in this area. A recent statement from the distributor cited an overall one-year increase in server-based sales of 36 percent. "Feedback from resellers suggests VARs are still working with a substantial amount of SMB end-users without servers," the company says.

"A server solution may in fact help a small business justify the purchase of additional equipment to take better advantage of their new upgrade," states the D&H press release. The distributor suggests that a newly-deployed server presents an opportunity to integrate scanners, document management systems, and more as a means of transitioning that company to electronic archiving or add paperless efficiencies throughout an office.

"Companies with security needs can add video surveillance, network security, and secure storage," D&H states. "Organizations whose workers travel between campuses can implement wireless networking. All these are natural progressions that can translate to incremental business for the VAR."

The D&H Server, Storage & Security Expo: The Backbone of SMB IT event will take place via the D&H Web site. It will begin at 10 a.m. EST on Thursday, Feb. 11, and it will run until 6 p.m. that same day.

The event will include seminars and materials from Intel, Microsoft's OEM division, SonicWALL, Cisco, and HP's server division. These sessions will be in addition to content from D&H, including a welcome from co-presidents Dan and Michael Schwab, the event's virtual hosts; and a keynote address from D&H sever specialist Bill Hersh.

The virtual trade show will also feature include instructional videos and interactive chat sessions hosted by live representatives from each participating vendor. Networking opportunities, similar to what might be enjoyed at a live trade show, will also be hosted and encouraged through the so-called "Networking Lounge," which will be laced with chat capabilities and educational materials from Lenovo and Symantec.

According to D&H, sweepstakes and American Express gift card prizes will be given away throughout the day.