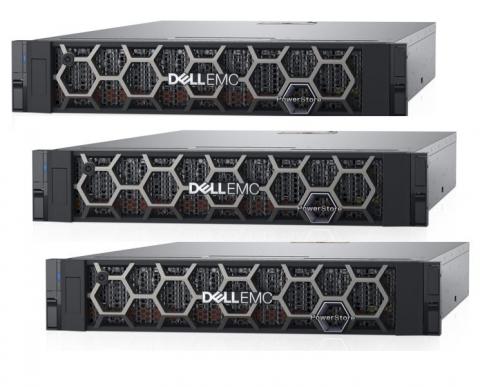 The PowerStore 500 provides up to 1.2 PB of capacity for $28,000 and up, while an update to PowerStore’s operating system provided at no extra cost is designed to deliver up to 25% faster performance on mixed workloads. By Rich Freeman
Tweet

Dell Technologies has rolled out a lower-cost addition to its PowerStore line of midrange storage arrays, along with a software update designed to enhance performance on existing models.

The new device, called the PowerStore 500, fits up to 1.2 PB of capacity in a 2U, two-node enclosure with slots for 25 2.5” NVMe drives. Users can connect up to four of the units in a scale-out architecture as well to form a 4.8 PB cluster. According to Dell, a single array can support up to 1,500 virtual desktops and perform up to 2.4 million SQL transactions a minute.

Designed to balance scalability, speed, and affordability, the PowerStore 500 lists for $28,000 and up.

“That’s going to bring PowerStore now and its advantages to a much broader range of businesses and use cases than ever before,” says Jon Siegal, vice president of marketing in Dell’s Infrastructure Solutions Group.

Dell will begin accepting PowerStore 500 orders on May 4th. Global shipments will commence on June 10th.

The software update, officially dubbed PowerStoreOS 2.0 and provided at no extra cost, delivers up to 25% faster performance on mixed workloads and up to 65% faster write speeds. Users can apply it to both new and existing appliances, Dell says, without disrupting operations.

Key features in the update include enhanced data reduction technology that’s designed to dynamically optimize capacity and performance simultaneously. “For example, when the system is under extreme IO demands, it automatically now can prioritize IO and deprioritize dedupe until the load lightens,” Siegal says. “Essentially what this is doing is allowing customers to better meet their performance SLAs while still meeting data reduction goals.”

New “smart tiering” functionality lets organizations deploy both storage-class memory (SCM) and NVMe drives in the same chassis, instead of one or the other as before. Dell foresees users taking advantage of that capability to equip a single device with multiple NVMe drives for storing data and a single SCM drive for providing metadata access.

“This is going to be really ideal for active datasets, where data moves out of the cache quickly,” Siegal says.

PowerStore arrays running the new OS can also utilize NVMe over Fibre Channel to extend existing NVMe support within the appliance itself to the entire network. Until now, SCSI has been the only transport layer option for PowerStore users.

“NVMe over fabric is much more efficient and scalable than SCSI, and it’s designed to make an external network array essentially feel like direct-attached storage to the host itself,” Siegal says.

A new version of Dell’s AppsON feature supports scale-out configurations involving multiple arrays. “We can now move workloads easily within an intelligent PowerStore cluster,” Siegal says. “This makes it much more ideal now for storage-intensive applications at the edge.”

LG Gram for Business 17 (2020): Big Reasons to Like It
END_OF_DOCUMENT_TOKEN_TO_BE_REPLACED