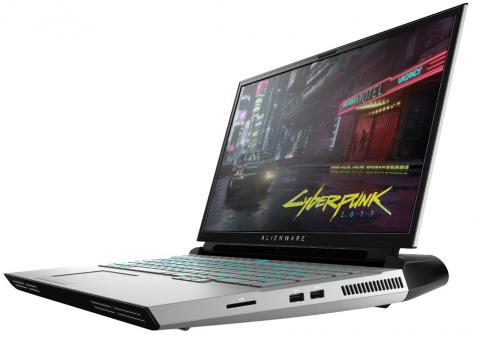 The Dell and Alienware models include a new edition of the Alienware Area-51m (pictured) with 10 cores and vapor chamber cooling. By Rich Freeman
Tweet

Dell and its Alienware unit have introduced new gaming laptops and desktops with faster processors and upgraded cooling.

Chief among them is an updated edition of Alienware’s Area-51m laptop. Equipped with 10th Gen Intel Core S-series processors running 20 threads, the 17-inch device is the first Alienware notebook with 10 cores.

To keep the heat produced by those resources under control, the revised Area-51m comes with Alienware’s new Cryo-Tech cooling technology, which employs a honeycomb air intake panel above the keyboard, larger fan blades, and elevated feet to increase airflow.

The product is also the first from Alienware to feature vapor chamber cooling. A “HyperEfficient Voltage Regulation” feature on select models is designed to maintain consistent power levels.

Also new from Alienware this week are the 15-inch M15 and 17-inch M17 gaming laptops. Designed to be slim but powerful, the two products are 19.5mm and 20.5mm thin, respectively, at their highest point.

Available now, meanwhile, is an upgraded Alienware Aurora gaming desktop. Optimized for esports, the new model is the first to offer a liquid cooled NVIDIA GeForce RTX 2080 SUPER graphics card that, according to Dell, reduces temperatures by up to 19.5% and noise by up to 69.2%. Other SKUs feature an AMD Radeon RX 5700 XT card, an AMD Radeon VII card, or one of numerous NVIDIA GeForce GTX and RTX cards.

Updated Aurora models are shipping now for $1,129.99 and up. Additional configurations selling for $879.99 and up become available on May 28th.

Showcased as well today are three new Dell-branded gaming laptops. The Dell G3 15 comes with either a 10th Gen Intel Core i5 10300H Quad Core processor or a 10th Gen Intel Core i7 10750H Hex Core chip, along with NVIDIA GeForce graphics up to RTX 2060 and 16 GB of 2933 MHz DDR4 memory. The unit’s anti-glare IPS FHD display with optional 144Hz refresh rate is rated at 300 nits.

Ransomware Rescue: How to Recognize and Avoid a Data Hostage Situation

EDR vs. AV: What You Need to Know
END_OF_DOCUMENT_TOKEN_TO_BE_REPLACED