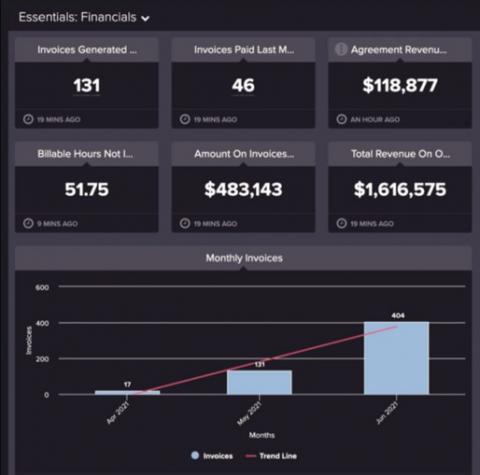 The company unveiled both a free, simplified version of its BrightGauge analytics solution and an addition to its PSA product designed to streamline cloud invoicing during its virtual IT Nation Explore conference this morning. By Rich Freeman
Tweet

ConnectWise has rolled out a lightweight version of its BrightGauge analytics tool and added a cloud billing reconciliation feature to its PSA solution.

The managed services vendor announced both new offerings at its 2021 IT Nation Explore event, which kicked off online today.

The new edition of BrightGauge, called BrightGauge Essentials, is a simplified version of that product meant for newcomers to that system and to tracking key performance indicators more generally. Currently in pilot testing and slated to reach market “in the coming weeks,” the product will be free to ConnectWise partners.

“If you’re not using BrightGauge yet, but want to begin using data to improve your business, BrightGauge Essentials was made for you,” said Brooke Candelore, a BrightGauge product manager, during the conference this morning.

Unlike the original, full-scale edition of BrightGauge, which lets users create or customize dashboards and reports, BrightGauge Essentials is limited to four pre-built dashboards and three reports covering critical metrics like average time to ticket resolution, tickets by SLA status, and revenue by sales rep.

At launch, the new system will integrate exclusively with the ConnectWise Manage PSA platform. Links to other products in the ConnectWise portfolio will arrive as well in the future.

The new cloud billing feature, called ConnectWise Manage Billing Reconciliation, is designed to streamline the time-consuming and error-prone process of transferring monthly consumption figures from cloud vendors to a PSA solution, and then correlating that data to customer invoices.

“There’s still many vendors and distributors that you’re working with where they’re delivering a spreadsheet and you’re having to manually move that content over to ConnectWise Manage,” said Sam Demulling, vice president of product management for quote and proposal products at ConnectWise, today.

Unlike most years, in which IT Nation Explore takes place on a few consecutive days in Orlando, this year’s show is being staged virtually in stages between today and August 12th. ConnectWise also announced that EDR software from SentinelOne is now available through its Fortify security suite at the show today, and outlined forthcoming measures aimed at protecting its products from cyberattacks.

Welcome to the Year of the Predictable
END_OF_DOCUMENT_TOKEN_TO_BE_REPLACED

LG Gram for Business 17 (2020): Big Reasons to Like It
END_OF_DOCUMENT_TOKEN_TO_BE_REPLACED