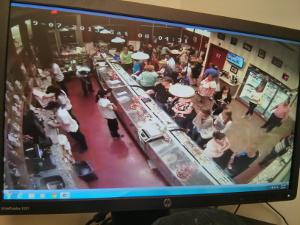 When Luis Fernandez, owner of Security Cam Depot, signed on to outfit the Carlo's Bake Shop flagship location in early 2010, he had never seen the TLC TV show "Cake Boss" and had no idea bakery owner Buddy Valastro and his family were emerging reality show celebrities.

In the three-plus years since then, Fernandez has realized the stroke of luck he encountered by partnering with Valastro at a time when his retail empire and popularity was continuing to grow. In addition to the Hoboken store, Security Cam Depot has installed security cameras for Carlo's in its Jersey City factory, Ridgewood, N.J., and most recently Westfield, N.J., along with home systems for Valastro and one of his sisters.

For the Westfield installation, Fernandez and his team used 10 Interlogix TruVision IP cameras, including nine inside the store and one outside near the back door. Through the associated software, Fernandez can add each new site to the system and tie the entire surveillance view together. Most of the stores are now on the system, other than the flagship, which still uses an analog DVR, although that's likely to change sometime soon, says Fernandez.

Because Fernandez now has experience working within the Carlo's Bakery footprint - most of the retail stores are laid out the same way, with the same front counter and similar back areas - he's become more familiar with where cameras should go and where they don't need to be.

"In the first store, you know what you want to cover, but you're not sure how it'll work when everything's in," he says. "Now, it's almost like cookie-cutter once you have the blueprint."

Each store gets the same network video recorder, so the budget for almost every location will end up being just about the same, says Fernandez.

The only difference in the Westfield store from many of the other Carlo's location is the A/V system. In other locations, Valastro called on 360 Media Innovations to deck out the store, but they went with a scaled-back 70-volt system for background music and video from Mood Media for this location.

Changing On The Fly
The Ridgewood location started with eight cameras but eventually grew to 12, says Fernandez. Westfield needed a couple less than that, he says.

"Once you get the cameras up, you have a better idea about blind spots," he says.

One thing you need to remember when working for Valastro, though: you better meet your deadline.

"When they give you a schedule, they want it done," says Fernandez. "In the beginning, it was a little rough to keep up, but they plan it pretty well."

Bakery Empire Grows
In the coming months, Valastro plans to continue growing the Carlo's Bakery retail empire by opening stores in Greenwich, Conn., Morristown, N.J. and Red Bank, N.J. Assuming nothing changes, expect to see Security Cam Depot along for the ride on those stores as well.

"He told us to get ready," says Fernandez.

This article was originally published by our content partner Commercial Integrator

ChannelPro Weekly Podcast: Episode #235 - Greetings from the New Hampshire Chamber of Commerce
8 Best Hacking Training Courses to Boost your IT Career
10 Things You May Have Missed at ChannelCon 2022
END_OF_DOCUMENT_TOKEN_TO_BE_REPLACED