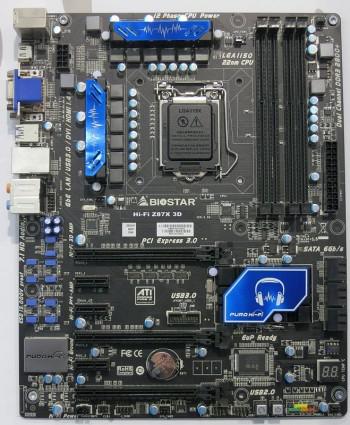 The company's new line includes the HiFi-Z87X3D, the HiFi-H87S3+, and the HiFi-B85S2. By Rachel Cericola
Tweet

Biostar is ready to rock out a trio of motherboards, under its HiFi brand. The company debuted the HiFi-Z87X3D, the HiFi-H87S3+, and the HiFi-B85S2 earlier this month at the CeBIT trade show in Hanover, Germany.

Each of the new models has the LGA 1150 CPU socket. However, our friends at Softpedia are saying that each one has a very different chipset -- well, at least two of the three. Two of the models have the H87 core-logic, with the HiFi-B85S2 getting the B85.

The last of the lot is the HiFi-B85S2. It's got a super-slim ATX form-factor with two DDR3 slots, a PCI-Express 3.0 x16 slot, a PCI-Express 2.0 x16 (electrical x4), two PCI-Express 2.0 x1 and two legacy PCI slots, and six SATA 6 Gbps ports. Similar to what's listed above, this one has the 6-channel Puro HiFi audio, as well as gigabit Ethernet, four USB 3.0 ports, and output options for DVI, D-Sub, and HDMI.

At last peek, Biostar had yet to announce pricing or availability for any of the new products.

Jabra PanaCast Review - Get Your Huddle On
END_OF_DOCUMENT_TOKEN_TO_BE_REPLACED