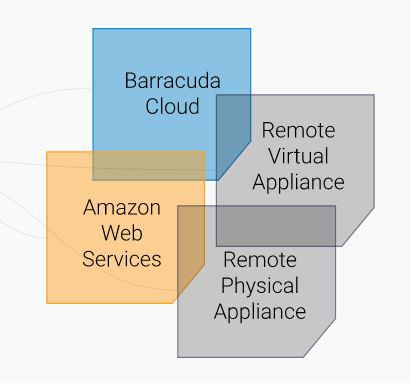 North American users of the vendor’s Barracuda Backup appliances who wish to store protected data offsite can now choose between Amazon’s S3 service or Barracuda’s own cloud. Support for Microsoft Azure will be available as well in the future. By Rich Freeman
Tweet

Barracuda Networks Inc. has equipped its virtual and physical Barracuda Backup appliances to use Amazon Web Services as a replication target for protected data.

Informed by requests from both customers and MSPs, the new offering allows organizations that store backups in the cloud to choose between Barracuda’s own offsite infrastructure and Amazon’s popular S3 service. Users receive access to the same de-duplication, bandwidth optimization, data compression, encryption, and other cloud replication features either way.

“It just gives them another option,” says Rod Mathews, senior vice president and general manager for data protection solutions at Barracuda, which is headquartered in Campbell, Calif.

The new service, which is available immediately to users in North America with global rollout to follow in coming months, offers automated setup functionality via the same administration console technicians use to perform other management tasks.

“They won’t have to do anything to configure this in their AWS account,” Mathews says. “They basically authenticate with their S3 account, point us to the right place where they want to store the data, and then we take it from there.”

Editions of the product from Barracuda’s Chelmsford, Mass.-based Intronis MSP Solutions division let channel pros who provide white-labeled cloud replication services store data securely in their own S3 account, rather than the customer’s, as well. Barracuda introduced the Intronis edition of Barracuda Backup, which offers consolidated, multi-tenant management, in March 2016 and added automated configuration capabilities to it in June.

Like all Barracuda Backup appliances, those that utilize Amazon’s public cloud for replication feature subscription-based pricing. AWS users pay “significantly lower” base fees than users who store data in Barracuda’s cloud, Mathews says, but must pay for S3 capacity at standard Amazon rates on top of that.

According to Mathews, Barracuda engineered its AWS replication service in a way that will allow for future enhancements that few of its competitors offer at present. Those could include the ability to recover files outside of Amazon’s native formats or to use AWS as a disaster recovery environment as well as replication target.

“We didn’t just lift and shift our infrastructure into the AWS environment,” Mathews says. “We actually did a little bit of re-architecturing to make sure that we could leverage their platform as effectively as possible.”

Barracuda plans to make the Microsoft Azure public cloud a third replication option for Barracuda Backup at an unspecified point in the future, and will consider adding support for additional clouds as well if customer demand justifies it.

A new research study from Barracuda reports that 83 percent of organizations worldwide use the public cloud to store data at present. According to Mathews, SMBs are especially likely to host backups in the cloud.

“[They] don’t necessarily have a second site or a second office that they can replicate data to,” he notes.

Managed services software maker Continuum introduced a similar low-cost archiving solution for SMBs that’s optimized for use with AWS in June. Barracuda customers and partners can use AWS for offsite vaulting as well.

ChannelPro 5 Minute Roundup for the Week of October 18th, 2021
END_OF_DOCUMENT_TOKEN_TO_BE_REPLACED

LG Gram for Business 17 (2020): Big Reasons to Like It
END_OF_DOCUMENT_TOKEN_TO_BE_REPLACED