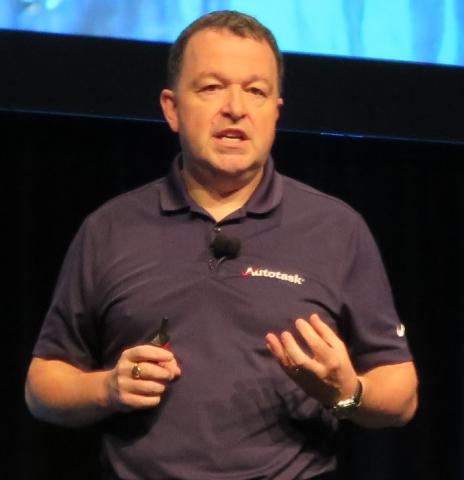 Named Autotask Endpoint Backup, the system is the latest step in a long-term campaign to construct an end-to-end suite of tightly integrated and heavily automated managed services solutions. By Rich Freeman
Tweet

In the latest expansion of its growing family of integrated managed services applications, Autotask Corp. has rolled out a new endpoint backup and disaster recovery solution.

Named Autotask Endpoint Backup and unveiled on day one of the annual Autotask Community Live event in Hollywood, Fla., the new solution puts East Greenbush, N.Y.-based Autotask in direct competition with BDR specialists like Datto Inc., of Norwalk, Conn., and StorageCraft Technology Corp., of Draper, Utah, as well as other managed service vendors like the LOGICnow division of Austin, Texas-based SolarWinds MSP.

During a morning keynote session, Autotask CEO Mark Cattini (pictured) emphasized that the key difference between the Autotask BDR solution and others in the market is its tight integration with the company’s combination RMM/PSA platform, which enables users to do everything from provision, deploy, and manage backup services to invoice for and report on them more efficiently.

“We’re different because we’ve operationalized it within the platform,” he said of the new system.

Vice president of product management Patrick Burns illustrated how that plays out in practice for MSPs during a product demo from the conference stage in which he utilized pre-packaged service definition and configuration information to add BDR for a client in a matter of minutes. He then used existing Autotask monitoring tools to ensure that backups are completing successfully and existing analytics tools to measure the profitability of backup contracts.

“Essentially we’ve automated everything throughout the entire customer lifecycle,” he said. “You can and should deploy this to all your endpoint clients.”

According to Cattini, today’s announcement is the latest phase of a long-term “unification platform” initiative aimed at constructing an end-to-end family of solutions built from the ground up to function together as a seamless whole. Achieving that goal, in turn, will help MSPs improve customer satisfaction and collect incremental revenue.

“Long-term success requires you to differentiate,” he said, adding that delivering new services rapidly and effectively is the best way for MSPs to distinguish themselves from peers.

Autotask has been slowly setting the stage for its unification platform ever since June 2014, when it was purchased by private equity firm Vista Equity Partners. Investment capital from its new owner funded subsequent acquisitions of RMM vendor CentraStage in September 2014 and file sync and share vendor Soonr last July. Those transactions have had a tangible impact, Cattini asserted, noting that the company has grown nearly 100 percent in the 27 months since its sale to Vista.

“We have doubled the size of the business in the last couple of years,” he said. Autotask presently has about 75,000 users in 125 countries generating over 50 million service tickets a year and collecting some $6 billion a year from customers. That last figure is up from $1 billion in the nearly six years since Cattini stepped into his current job.

Unifying the Autotask platform is making a measurable difference for MSPs as well, Burns said, citing the results of a sponsored economic impact study by analysts at Forrester which showed that utilizing integrated RMM and PSA functionality within one solution saves 1 hour of billable time per technician per day. Extrapolating from that figure based on the 1,402 Autotask partners who have adopted the combined platform since it rolled out in April, Burns estimated that channel pros have saved over 1.6 million hours of productivity to date.

“It’s a big number and I think it’s a meaningful number,” he said.

Autotask’s foray into BDR, which draws on code it acquired along with Soonr, comes at a time when many managed service software makers are expanding into new solution categories. This year alone, RMM vendors Kaseya Ltd. and SolarWinds N-able have added PSA systems to their product portfolios, BDR vendor Datto has launched a new file sync and share solution, and file sync and share vendor eFolder Inc. has entered the BDR market by purchasing Replibit LLC.

Today’s announcement also stands in stark contrast to the stated intentions of Arnie Bellini, CEO of Autotask rival ConnectWise, who told ChannelPro during a June interview that he has no intention of adding a BDR solution.

“We’ve had many opportunities to invest in BDR,” he said. “We don’t think it’s a viable component of the suite because people want choices with backup and disaster recovery.”

Autotask, for its part, plans to introduce more pre-assembled, revenue-generating services like the one it introduced today. Without providing specifics, Cattini hinted that Autotask will continue building “a strategically aligned series of products that we believe meets your needs.”