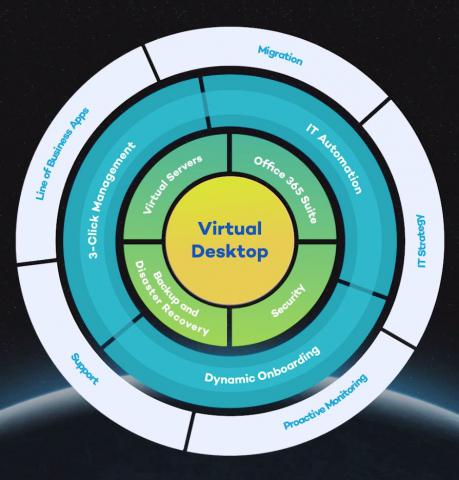 The new release allows MSPs to host the system, which provides everything needed to build and run complete SMB networks, in the public cloud as well as on Adar’s own private cloud.

Adar Inc. has introduced a new version of Nerdio, its comprehensive IT-as-a-Service solution, that runs on Microsoft Azure.

Based entirely online, Nerdio is designed to provide MSPs everything they need to create, configure, and manage complete SMB network environments, from virtual servers and desktops, to collaboration, productivity, BDR, security, and administration software.

Until today, Chicago-based Adar hosted the system exclusively on a custom-built private cloud hosted in co-located data centers. The release of Nerdio for Azure gives MSPs and their clients the option of utilizing Microsoft’s public cloud infrastructure instead.

“It’s no secret that Microsoft’s strategic positioning right now is they want to move as many workloads to Azure as possible,” says Adar CEO Vadim Vladimiriskiy. “We’re sort of trying to ride that wave.”

The Azure edition of Nerdio offers functionality not available in its private cloud counterpart. For starters, VDI is the sole option for hosting desktops in the legacy version of the solution. The new Azure version, however, also allows businesses to save money by placing multiple users with basic requirements, like call center operators, on shared virtual machines using Microsoft’s Remote Desktop Services technology.

Other capabilities exclusive to Nerdio for Azure include the ability to publish specific virtual applications rather than complete desktops or workspaces, desktop auto-scaling technology that uses predictive analytics to save money by proactively scaling virtual machines up or down as requirements shift across the workday, and an automated agent that periodically checks how quickly the system executes common desktop tasks. That last feature is designed to give administrators a more accurate sense for how fast or slow the system feels to the people using it than CPU utilization data can.

“You can see the performance of the system as the end user will experience it,” Vladimiriskiy says.

Finally, only the Azure-based version of Nerdio allows businesses to utilize virtual machines powered by the NVIDIA Tesla GPUs that Microsoft began previewing in August. According to Vladimiriskiy, those new instances, which are not yet available in all Azure regions, make hosting workloads with steep screen rendering requirements in the cloud a practical option for the first time.

“You can run very graphically intensive workloads like CAD and video editing and things that are generally not well suited for a VDI environment,” he says.

Azure is the only public cloud Nerdio supports at present, but Adar may port the solution onto other platforms like Amazon Web Services as well in the future.

“Most of our partners and most of our customers are Microsoft shops,” Vladimiriskiy observes. “It was just a more natural fit to start with Azure.”

Formerly a managed service provider, Adar originally developed Nerdio for its own use. Like numerous other firms in recent years, the company eventually transformed itself from MSP to vendor and began selling the solution commercially.

According to Vladimiriskiy, the Nerdio partner program, which debuted last December, allows channel pros to jumpstart a cloud computing practice by piggybacking on Adar’s roughly 10 years of experience streaming IT services to end users.