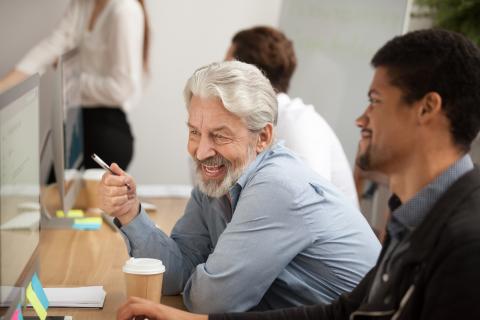 REVERSE MENTORING turns the tables on the traditional model of a senior leader imparting knowledge to a more junior employee. With reverse mentoring, younger staff educate senior executives on what they need to be aware of to lead junior personnel more effectively.

A relatively new concept, reverse mentoring is gaining momentum as a way to develop more equitable leaders, according to Trisha Daho, founder and CEO of leadership strategy firm Empowered.

Today, when when DEI issues are drawing unprecedented attention inside organizations, one of the barriers can be a lack of open-mindedness on the part of leaders, according to Lockwood Primus.

For instance, when Leading Now works with clients on reverse mentoring, the firm presents research on the gender-based ways employees are measured. If an organization is struggling to get more women into leadership roles, the data shows, generally it’s because they’re not being promoted. “The challenge becomes why,” Lockwood Primus says.

Sometimes it boils down to the subjectiveness of performance reviews. There may be two employees who perform at an equal level, “but a man will be written about one way and a woman, a different way, and this creates a lack of opportunity for her to be promoted,’’ Lockwood Primus says. “What we know is for women to be promoted they have to demonstrate and have the skills for that role. For men to be promoted they have to be seen as having potential … so they measure future success differently,” she explains.

Leading Now’s approach is designed to give a manager and “people further down the food chain the knowledge around how to appropriately do performance management reviews,” Lockwood Primus says. The manager and employee are both given specific questions so they can converse, with the goal of each gaining a different perspective.

The benefit for younger employees is not only getting to share their point of view but the ability to engage in conversations with senior leaders who they might otherwise never have been invited to talk with.

Not everyone is open to reverse mentoring, Lockwood Primus acknowledges. If you have a culture where diversity of opinions--especially around challenging topics--aren't welcome, "the reverse mentoring scenario won't happen off the bat," she says.