What is 'renting' software?

For the low-low price of $99, you can unlock the entire Microsoft Office Suite for one year, equivalent to Office 2013 Professional. That’s where the “365” in Office 365 comes from, but it still installed on your computer as Office 2013.  Renting Office 365 is no different than purchasing a subscription for anti-virus software or your annual tax software, and while you may not be getting round-the-clock updates, Microsoft has pledged to release new updates and features to 365 users on a regular basis. When time runs out, so does your access to the software beyond the ability to open, read, and print documents. You won’t lose access to your files you’ve saved to your SkyDrive and are free to open and edit them with another program or the online version of Office, but your access to the full editing features of Office is withheld until you upgrade. 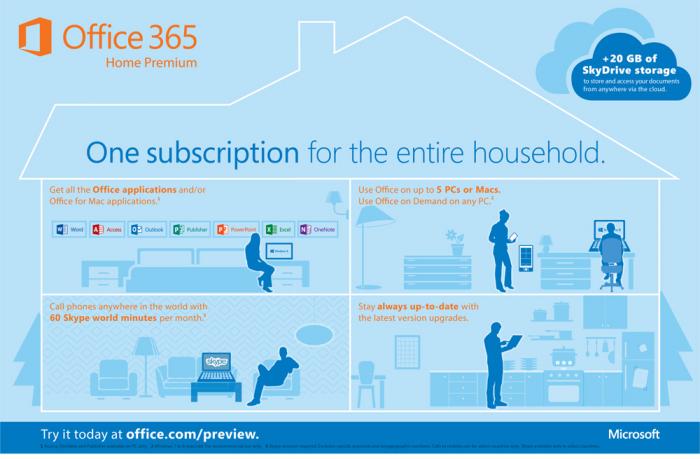 As mentioned above, purchasing a 365 day license to Office 2013 gives you access to the hands-down best version of Office 2013 to date. But let’s save that for another article. In addition to the full suite of Word, Excel, PowerPoint, Outlook, Publisher, Access and OneNote, you get the rights to install the suite on up to five PCs or Macs and “select other devices” that will (some day) include Android and iOS devices. Windows Phone and Windows RT devices already have Office included, and don't count against your subscription. You also get an extra 20Gb of SkyDrive storage for the primary account, Microsoft’s cloud-based solution for streamlining how you save your documents, as well as 60 minutes of Skype calls per month and Microsoft's “Office on Demand” feature.

What is "Office on Demand," you ask? Say you are visiting a friend’s house to collaborate on a flyer for a party you are hosting, and your friend doesn’t have Office installed. No problem, assuming said friend has a broadband connection – you can sign into your Microsoft Live account and stream a full version of Publisher to your friend’s laptop. When you’re done just sign out and it’s like you were never there. This feature is also great for environments where you don’t have the ability to install software, such at the local library. One caveat: the PC must be running Windows 7 or Windows 8 to use this feature.

The Human Condition
The ASCII Group Announces the Formation of MSP Security Committee
Your Next Move: Cyber Risk Analyst
The Government is Telling Your Clients How to Select an MSP
END_OF_DOCUMENT_TOKEN_TO_BE_REPLACED

Jabra PanaCast Review - Get Your Huddle On
END_OF_DOCUMENT_TOKEN_TO_BE_REPLACED