ICYMI: Our Channel News Roundup for the Week of October 3rd 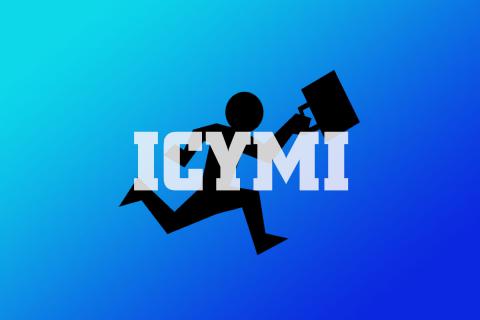 An avalanche of Google products, good news for makers of virtual reality gaming rigs, and some work life balance research results likely to surprise a certain someone here at ChannelPro are all among the stories we didn’t cover this week. By Rich Freeman
Tweet

Don’t tell us our priorities are misaligned here at ChannelPro. We know exactly what our loyal readers wanted us doing this week: Watching postseason baseball. And by golly, we came through for you! In the process, however, we missed a few stories you might benefit from knowing about. Let’s take advantage of a break between innings to recap them, shall we?

Googlanche. Gotta hand it to the Google watchers. They may not have correctly predicted everything introduced during Tuesday’s heavily anticipated launch event, but given how much stuff Google rolled out they came impressively close.

Most of those products—including Google’s would-be Amazon Echo killer and aspiring Amazon Fire TV Stick assassin—are meant for consumers, but it’s just a matter of time before you’re supporting a few of those new HTC-manufactured Pixel phones, and those upholstered Daydream VR goggles (pictured) could have commercial applications too.

Meanwhile, the least heralded but most significant player in this week’s Googlaunch was the company’s artificial intelligence solution. Named Google Assistant and first introduced in May, it’s a core component of that new phone and the new Google Home device too. It also offers up yet more evidence (if recent announcements by Microsoft, Salesforce, and IBM weren’t evidence enough) that AI is shaping up to be the next big battleground among IT’s top vendors.

And before we forget. For some reason, Google decided to wait 6 days before adhering its stripped down new G Suite brand to Google Apps for Education just like it did to the rest of its Apps last week.

Hiding in plain sight. With Google and Salesforce monopolizing everyone’s attention, you could be forgiven for not noticing that Commvault and VMware’s AirWatch unit had events this week too. Alas, we’re not sure Commvault and AirWatch will be so quick to forgive us for somehow failing to notice their conferences, but notice we eventually did and just in time to learn that:

And as long as we’re talking about overlooked events…Oculus employed an event of its own this week to reveal that its Touch controllers ship on December 6th for $199, that new functionality for inviting up to eight custom avatars to deeply strange looking virtual get-togethers (pictured) is on its way soon, and much more.

The buried lede for system builders in that news dump, however, is that thanks to a new technology called Asynchronous Spacewarp that allows games to look great at dramatically lower framerates, the minimum technical spec for the Oculus Rift VR device has dropped low enough to accommodate much cheaper PCs, including a new AMD-powered laptop from Cyberpower priced at just $499.

There’s only one general more bad ass than George S. Patton. He’s named General Availability, and this week he stopped by Redmond to help Microsoft ship:

And were he here to join us, we’re sure General Availability would salute Azure’s new lower prices too.

We’re less sure which imaginary officer should get credit for the rest of this week’s product news. But we do know there was a lot of it:

Not that vendors only talk about products, mind you. We also learned this week that:

What, help desk technician didn’t make the list? Cheer up, techies! You may or may not realize it, but according to online employment service Glassdoor, at least, you enjoy some of the world’s best work life balance. In fact, by our count, 14 of the occupations on Glassdoor’s recently published work life balance top 25 list—including computer programmer, UI designer, and technical account manager—are IT related. Those rankings are all based on employee input too, not some arbitrary selection scheme.

We do have to wonder who those input-providing employees are, though, given that technical editor is number 19 on the list and web designer placed 17th. We happen to know someone who performs both roles and suspect he’s chuckling ruefully to himself right about now as he reads this post through bleary eyes before heading off to pour himself another gallon of coffee.

ChannelPro 5 Minute Roundup for the Week of January 23rd, 2023
END_OF_DOCUMENT_TOKEN_TO_BE_REPLACED