ICYMI: Our Channel News Roundup for the Week of October 24th 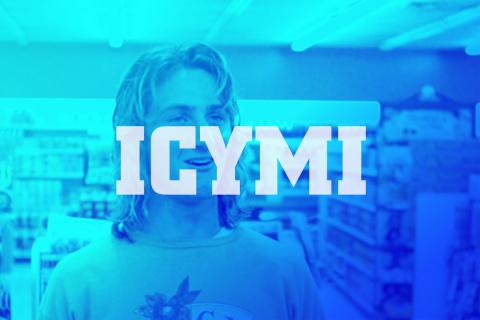 News dumps from Microsoft, Apple, IBM, and others, scary Halloween-themed statistics, and two nearly simultaneous announcements sure to have brought a smile to Jeff Spicoli’s face are among the stories we didn’t get around to covering this week. By Rich Freeman
Tweet

So there we were, all set to apologize once more for not bringing you such an oversized hunk of the week’s tech industry stories, when the root of our persistent failing finally occurred to us. And sorry, dear reader, but it’s you. Yes, you, with your insatiable desire for ChannelPro’s take on the latest doings in the world of IT. I mean, if you’d just spend your time playing computerized miniature golf like a sensible person we wouldn’t have to go through this exercise every week. But since you seem to get at least a little value out of our Friday headline roundup, we’ll strain ourselves to pull one together for you yet again.

Big names, big news. If there’s a theme to this week’s ICYMI it’s giant vendors dumping giant—or at least large—volumes of news on us all at once. And if there’s a theme to Microsoft’s news dump it’s the joy of creativity, which the software, and now hardware, maker aims to help customers experience more richly with the help of new additions to its Surface device line and a new version of its Windows 10 operating system.

On the Surface front, the newcomers include the Surface Studio, a slick all-in-one PC with an adjustable 28-inch display, NVIDIA GeForce GPU, 4.5k ultra HD screen, and somewhat hefty price $2,999-and-up price tag. A nifty looking little peripheral named the Surface Dial lets users of the Studio and other Surface devices access tools, rotate images, and otherwise interact with whatever they have on their display, while an upgraded Surface Book PC delivers longer battery life, faster processing speeds, and enhanced graphics performance.

As for Windows 10, Microsoft previewed a Creators Update edition that will arrive as a free upgrade early next year. The new OS will offer more than we can get into here, but suffice it to say the top features mostly have to do with 3D imagery, as well as mixed reality experiences brought to life by new headsets from Acer, ASUS, Dell, HP, and Lenovo.

In keeping with the whole artistic expression motif, you can color us impressed, Microsoft. On (virtual) paper, at least, it looks like you’ve given yourself a shot to surpass Apple as the go-to source of cool devices and software for creative professionals. Now let’s see how many of those creative professionals signal their agreement by taking advantage of Microsoft’s MacBook trade-in offer.

Meanwhile, in lesser news from Microsoft this week…There was this:

Good, Bad, and Ugly. One day after Microsoft’s launch event, Apple unwrapped three slender new MacBook Pro laptops with a dynamically adaptable, hi-res Touch Bar in place of the function keys. Alas, that debut occurred one day after word arrived that the hardware maker’s new wireless iPhone earbuds will reach stores later than expected and two days after a disappointing quarterly earnings report dragged down the company’s stock price, and with it the entire Dow Jones industrial average.

Johnnies on the spot. Those would be Kensington and LG. The former already has a locking solution out for the brand spankin’ new Surface Studio while the latter has shipped 4K and 5K displays for use with those spiffy new MacBook Pros.

It’s Watson’s world. We’re all just living in it. Or so implied IBM this week at its World of Watson event in Las Vegas, during which it unveiled a herd of new Watson-powered offerings, including:

Anyone know what got into Ricoh this week? Because they glommed onto the too-much-is-just-enough headline generation game too by announcing:

Hang in there, people! We’ve got one more news barrage for you, this time from Intuit, which at its QuickBooks Connect conference in San Jose announced:

All evidence to the contrary this week, some vendors still do product launches one at a time. For instance:

Wait, you mean vendors do stuff other than launch products? Yup.

And in honor of Halloween. Here are two fright-related bonus stats:

Best. News. Ever. For Jeff Spicoli, anyway. Because the world learned this week that Eaze, the marijuana delivery service sometimes referred to as “Uber for weed,” has received a fresh round of venture capital on the very same day that General Mills announced it will be introducing a Girl Scout cookie BREAKFAST CEREAL. And yes, that’s medical marijuana that Eaze brings to your doorstep and those Thin Mints and Caramel Crunch cereals (made with whole grain!) are available for a limited time only, but with 9 states just days away from voting on some form of legalized pot it would appear serendipity has conspired to ensure that many of us spend a lot of time affixed to our couches satisfying our munchies while happily binge watching…well, anything really.