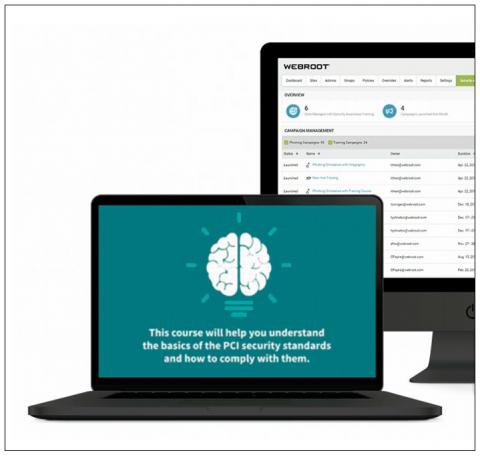 Webroot has introduced a special promotion for its security awareness training product that lets ConnectWise partners get licenses at 50% off for roughly six months.

The deal, which went into effect on Wednesday and expires on November 30th, was timed to coincide with ConnectWise’s 2019 IT Nation Connect event, which concluded yesterday in Orlando.

Any ConnectWise partner not already using Webroot’s training solution is eligible for the half price rate, which applies from the date of purchase until May 15th of next year. Licenses must be bought from ConnectWise, rather than a distributor, Webroot, or another Webroot platform partner.

The goal of the promotion is to get more MSPs offering security education to their clients at a time of escalating threat activity against SMBs generally and MSPs specifically, according to Charlie Tomeo, vice president of channel sales at data protection vendor Carbonite, which bought Webroot in February.

“Education is something that’s very important, especially because our market happens to be a target right now,” he says. Offering an awareness training product at discounted prices, Tomeo continues, helps keep cost from being the reason an MSP fails to add training to their service roster.

Cost is in fact one reason adoption of security training programs from Webroot and other vendors is relatively low among MSPs at present, according to Tomeo. Not knowing how to pitch the service to clients is another.

“They haven’t figured out how they sell it,” Tomeo says, noting that Webroot plans to roll out enablement programs designed to teach effective sales tactics for awareness training.

Not knowing how to incorporate security education into their current offerings is another issue MSPs are wrestling with, Tomeo says. Newcomers to the solution don’t know whether to charge for it or simply tack it onto their existing service bundles as a means of cementing customer loyalty by providing extra value. Billing clients for training is a concern for some channel pros who feel they’ve already asked clients to pay more for new services too many times.

“It used to be that they didn’t have backup. They didn’t have DNS protection,” Tomeo notes of SMBs. “How do I keep going back and telling them every six months you need something else?”

An additional cohort of mostly smaller, younger MSPs, Tomeo continues, is still familiarizing itself with security training awareness and assessing its importance. “[They] can’t determine yet if it’s a nice to have or a need to have,” he says.

ConnectWise executives called out Webroot’s awareness training promotion on stage during an IT Nation connect keynote last Wednesday as an example of how vendors can contribute to the massive, industry-wide campaign it’s coordinating to fight back against cybercrime.

“We’ve all got our part to do,” says ConnectWise CEO Jason Magee.

LG Gram for Business 17 (2020): Big Reasons to Like It
END_OF_DOCUMENT_TOKEN_TO_BE_REPLACED