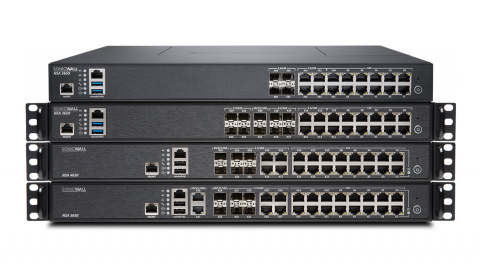 The product wave includes a new set of NSa midrange firewalls and an updated version of SonicWall’s real-time deep memory inspection technology capable of scanning Office documents and .PDFs for hidden malware. By Rich Freeman
Tweet
In a major expansion and consolidation of its threat detection and response portfolio, SonicWall Inc. has announced a slew of new and updated security products, including multiple firewalls, a newly formalized cloud-based threat intelligence platform, and an updated edition of the company’s deep memory inspection technology that can find hidden malware in Microsoft Office documents and .PDF files.
Together with the rest of SonicWall’s product catalog, the new offerings are designed to continuously protect vulnerable end users by feeding real-time threat information from the cloud to locally-installed firewalls, mobile access appliances, and wireless access points. According to Steve Pataky, Milpitas, Calif.-based SonicWall’s senior vice president for worldwide sales and chief revenue officer, only such a mix of onsite and offsite defenses can keep businesses safe in a time of constantly evolving threats.
“Just having a firewall installed and turned on may not give the level of protection that’s needed,” he says.
Included within the new product wave are SonicWall’s first virtual firewalls and first web application firewall, both of which were previewed in February, as well as an updated set of midrange firewalls not previously disclosed.
The NSv line of virtual firewalls is designed to provide the same capabilities as SonicWall’s physical appliances in a software-based form factor suited to private and public cloud networks. It runs on the same SonicOS operating system as the company’s hardware-based security devices.
Equipped with deep packet inspection functionality and a real-time intrusion scanning engine, the SonicWall Web Application Firewall is designed to block denial-of-service attacks, context-aware exploits, and other attacks before they can impact solutions running in public, private, and hybrid cloud environments. Like the NSv offerings, it can be deployed locally on the VMWare and Microsoft Hyper-V virtualization platforms or offsite in the Amazon Web Services and Microsoft Azure public clouds.
SonicWall’s latest NSa firewalls are designed to give mid-tier organizations the tools and processing firepower needed to perform deep packet inspection of encrypted web traffic at high speed. Officially dubbed the NSa 3650, 4650, and 5650, those units support twice as many SPI connections as their predecessors and four times as many DPI-SSL connections. Those are capabilities businesses forced to process increasing quantities of SSL- and TLS-protected data badly need, according to John Gordineer, SonicWall’s director of product marketing.
“We’re seeing the amount of encrypted traffic that’s coming into an organization really take off,” he says. “You need a lot of horsepower and some heavy-duty processing on premises to be able to deal with that.”
The 2018 SonicWall Cyber Threat Report, which was published last month, states that 68 percent of all web traffic in 2017 utilized SSL or TLS encryption, a 24 percent increase over the previous year. While most of that data was legitimate, some of it harbored concealed malware.
The security strategy SonicWall has been rolling out gradually for the past several years couples on-premises products like the new firewalls shipped today with cloud-based threat intelligence resources. The company officially consolidated those previously-introduced online resources today under a common banner, the SonicWall Capture Cloud Platform.
“It’s not 2005 anymore,” Gordineer says of the continuous threat data provided by the Capture Cloud Platform. “You can’t have a device onsite that is updated maybe every time you load new firmware.”

ICYMI: Our Channel News Roundup for the Week of March 23rd
END_OF_DOCUMENT_TOKEN_TO_BE_REPLACED