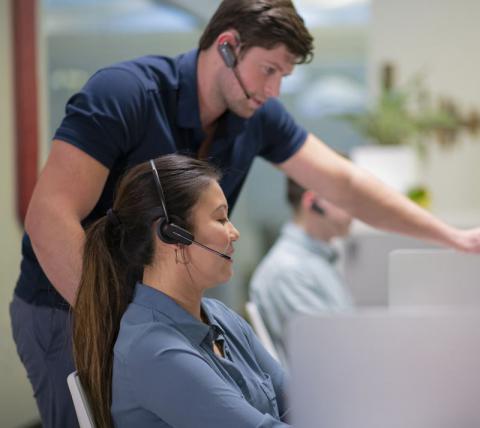 Poly has introduced a Bluetooth headset offering three-way connectivity with PCs, desk phones, and mobile phones through a single base station.

“This is actually one device that you can wear three different ways,” notes Chris Thorson, senior director of solutions marketing at Poly. “You can put it on the ear, behind the ear, or over the head.”

Other standard features, according to Poly, include HD-quality sound, noise cancellation functionality, and a swappable battery.

Set to reach market in May, the Voyager 4245 is the latest addition to Poly’s growing family of devices certified for use with Microsoft Teams. A version of the new product includes a built-in Teams button that launches the Microsoft application automatically.

Earlier Teams-certified offerings among the 15 in all now available from Poly include the corded Blackwire 3300 headset series and the Calisto 3200 and Calisto 5300 speakerphone series. Wireless Bluetooth headset families with Teams-certified models include the Voyager 4200 Office and 5200 Office lines, which debuted last November, and the earlier 6200 UC and 8200 UC lines.

Teams usage is spiking at present due to travel restrictions and social distancing guidelines triggered by the COVID-19 pandemic. According to Microsoft, the platform supported over 900 million meeting and calling minutes in a single recent week, and now averages more than 44 million users daily.

All of that activity has put Teams-certified headsets and speakerphones in high demand, as normally office-based employees equip themselves for working from home. According to Thorson, Poly has ramped up production to keep pace with those orders.

“Our guys in the warehouse are working overtime,” he says. “We have the luxury or benefit of doing a lot of our assembly in Mexico, and we have parts on hand.”

As a result, Thorson continues, wait times for new hardware have been limited to date. “If it’s backordered, the backorders are a couple of weeks out, but it’s not like months out,” he says.

Poly announced its Studio X Series of purpose-built video bars for Microsoft Teams late last year and a collection of Teams-enabled desk phones a year ago.

ChannelPro 5 Minute Roundup for the Week of January 11th, 2021
END_OF_DOCUMENT_TOKEN_TO_BE_REPLACED

Jabra PanaCast Review - Get Your Huddle On
END_OF_DOCUMENT_TOKEN_TO_BE_REPLACED