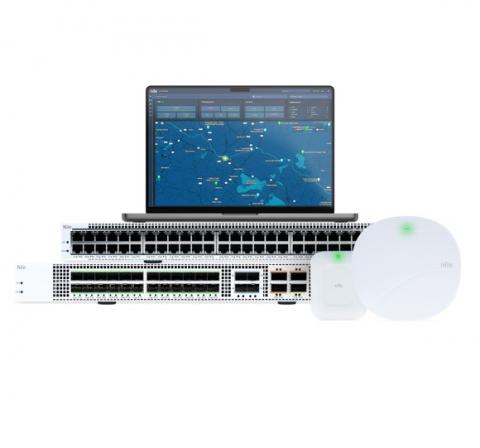 The just launched startup’s heavily automated, partner-delivered solution runs on all-new hardware and software that buyers pay for solely based on what they consume. By Rich Freeman
Tweet

The question to ask about networks today isn’t what’s wrong with them, says recently launched startup Nile. It’s what’s right with them.

“Networks are too costly, they’re too complex, they aren’t cloud, and they’re inherently insecure,” declares Lou Serlenga, the company’s chief revenue officer. “We’re changing all of that.”

Just out of stealth mode last week, the company was co-founded four years ago by one-time Cisco Chairman and CEO John Chambers and Pankaj Patel, another former member of Cisco’s c-suite. The AI-powered wired and wireless networking solution they and their team built drawing on $125 million of venture capital and some 40 awarded or pending patents runs on all-new hardware and software and a homegrown, cloud-native operating platform designed to configure, monitor, patch, optimize, and upgrade itself on a 24/7 basis.

“That automation, that level of intuitiveness and simplification, is foundationally different than anything anyone else in the marketplace can actually deliver,” Serlenga says. The system comes with a multitenant management console, a self-service portal for co-managed environments, and zero-trust security functionality that validates access requests and automatically segments users and devices.

Additionally, Serlenga continues, and in contrast to network-as-a-service vendors that charge separately for hardware, Nile bills businesses on a per-user basis solely for what they consume.

“Most as-a-service solutions are not really as-a-service solutions,” he says. “They’re complex leases that bundle up a bunch of technology and then offer it to a customer in some type of an operating expense that’s not true consumption. The way that we’ve approached it is to deliver an actual consumption-based service where you pay for what you utilize.”

Subscriptions include all of the initial access points, routers, switches, and other gear users need, plus ongoing refreshes. “We’ve basically eliminated a huge risk for customers, which is technology obsolescence,” Serlenga says.

Nile’s service-only model shields channel pros from financial risk too, he adds. “If you think about what a partner has to absorb when they go out and build a network-as-a-service offering, they have to go out and think about, ‘hey, are we going to upfront the actual capital to purchase this technology and then try to resell it, or are we going to go out and finance it with someone other than the OEM itself?’” With Nile, Serlenga says, “all of those complexities go away.”

Subscriptions, which can be billed monthly, quarterly, or annually, are backed by SLAs built around each buyer’s capacity, coverage, and performance needs. “We’ll basically customize that based on the customer’s desires and their business challenges or business outcomes,” Serlenga explains. “We do that in conjunction with the partner and we share that revenue with the partner.” Users can adjust subscription terms over time as requirements evolve, he adds.

Nile sells exclusively through partners. Like its technology, the company’s Connect partner program, also launched last week, emphasizes simplicity. There are no entry requirements or tiers, and all members regardless of size receive the same “very, very rich” margins, says Serlenga, who declined to specify what those margins are.