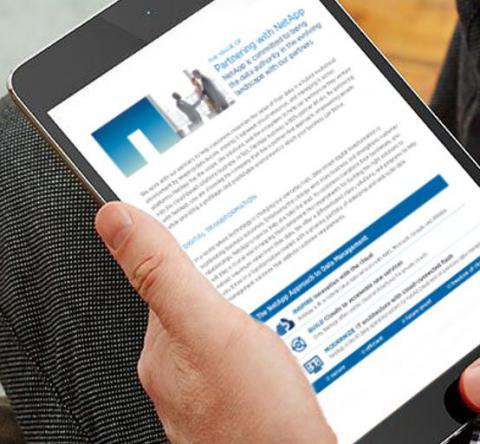 Set to go into effect next month, the change is part of a larger transition by NetApp towards a new identity as a maker of both on-premises storage hardware and cloud-based storage and productivity services. By Rich Freeman
Tweet

NetApp has announced plans to roll its Cloud First partner program into its larger, and older, Unified Partner Program (UPP).

The forthcoming change, which goes into effect at the start of NetApp’s 2021 fiscal year on August 1st, is one of several updates to UPP that include expanded benefits for lower-tier members, increased investments in tools and sales incentives, and simplified membership processes.

“Now there’s only one contract that the partners have to sign,” she says, noting that many Cloud First members are also enrolled in UPP separately.

NetApp launched Cloud First in conjunction with a larger transition from its roots as a maker of on-premises storage products to its new identity as a hybrid cloud vendor offering both storage hardware and cloud storage services like Azure NetApp Files and NetApp Cloud Volumes.

Combining Cloud First with UPP, which has historically served resellers of legacy NetApp infrastructure, is a further step in the company’s ongoing strategic makeover. Other recent steps include the acquisition of cloud workspace vendor CloudJumper, in April, and of public cloud compute management and cost optimization vendor Spot last month.

Going forward, Cloud First members will receive the same payouts on cloud-based deals as before but participate in incentive programs for non-cloud sales as well. They will also be eligible to take any of the classes available in the NetApp University certification program. Existing UPP members looking to build a cloud business, meanwhile, will have access to benefits previously open only to Cloud First members.

Most Cloud First members will enter UPP at the entry-level Registered tier. Beginning next month, however, all Registered partners will enjoy expanded benefits, including comprehensive access to all of the resources in NetApp’s partner hub.

“They can see everything that’s there,” Reynolds says. “Previously, they had a limited view of things that were just pertinent to smaller partners.”

Registered partners will also be free to take training courses through the NetApp Learning Services program.

Such changes are aimed at helping Registered UPP members increase their NetApp revenue more quickly. “We wanted to make sure that we were giving them enough information and tools and resources to be able to understand our whole product set and our services offerings, and to be able to grow,” Reynolds says.

Replacing a wider range of incentive programs with just those three is one of several UPP changes aimed at making the program simpler to navigate. Shortening the program guide from 72 pages to a little over 20 is another.

ChannelPro 5 Minute Roundup for the Week of July 19th, 2021
END_OF_DOCUMENT_TOKEN_TO_BE_REPLACED

Jabra PanaCast Review - Get Your Huddle On
END_OF_DOCUMENT_TOKEN_TO_BE_REPLACED