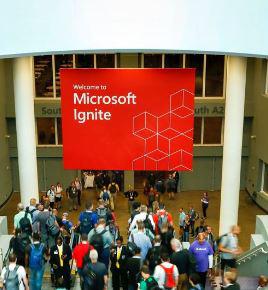 Two of many products announced at the vendor’s annual conference for IT pros, including several for IoT developers, the new virtual desktop and threat protection offerings are designed for use with the Microsoft 365 productivity and security bundle. By Rich Freeman
Tweet

Microsoft has unveiled a new virtualized desktop and application service and a new threat detection and response solution.

Both offerings debuted on day one of Microsoft’s Ignite conference for IT professionals, which kicked off this morning in Orlando.

The new VDI offering, called Windows Virtual Desktop, is “the only service to enable a multi-user Windows 10 experience, including compatibility with Microsoft Store and existing Windows line-of-business apps while delivering cost advantages previously only possible with server-based virtualization,” according to a blog post by Julia White, corporate vice president for Microsoft Azure, and Brad Anderson, corporate vice president for Microsoft 365.

Though designed for use with Windows 10 Enterprise, Windows Virtual Desktop supports Windows 7 as well and comes with free extended security updates for that operating system. Mainstream support for Windows 7, which currently commands 42.45 percent of the desktop operating system market according to NetMarketShare, is set to expire in January 2020, after which most users must pay a fee for continued access to security patches. Subscribing to Windows Virtual Desktop instead, according to Microsoft, is an additional option for keeping legacy apps in production while transitioning to new Windows releases.

Despite the presence of “desktop” in its name, Windows Virtual Desktop lets users virtualize individual applications as well. The new system also integrates natively with the conditional access, data loss prevention, and integrated management features of Microsoft 365, a bundled suite introduced in 2017 that combines operating system licensing and security functionality with an Office 365 subscription.

Supplemental capabilities for Windows Virtual Desktop will be available from a range of Microsoft’s ISV partners, including Citrix, CloudJumper, and ThinPrint, via Microsoft’s Azure Marketplace.

Microsoft will offer Windows Virtual Desktop initially to users of its Windows 10 Enterprise and Windows 10 Education editions. Subscribers must have an account in the Azure public cloud to use the new service, which is slated to enter public preview later this year. The system is optimized for use with the ProPlus edition of Office 365.

Global outlays on cloud-based VDI solutions will approach $10.52 billion by 2023, according to Allied Market Research.

Microsoft Threat Protection, the security system Microsoft introduced today, is “a new end-to-end solution that detects cyberthreats, remediates their effects and protects organizations from new and changing threats,” according to a Microsoft blog post.

“Working with unparalleled access to data across our services, it brings together threat protection solutions across email, PCs, documents, identities and infrastructure into a single integrated experience in Microsoft 365 saving thousands of hours for over-stretched security teams and protecting customers from the evolving nature of attackers from organized crime to nation-states,” the post continues.