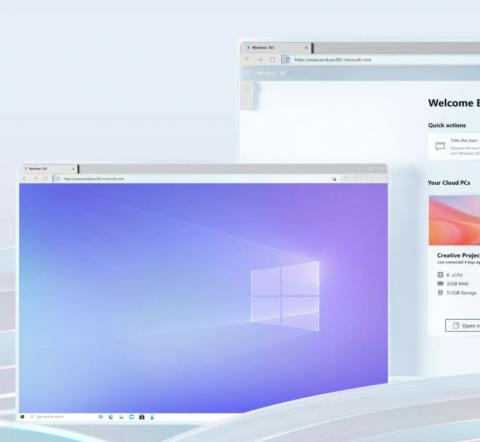 Introduced at the Microsoft Inspire partner conference today, Windows 365 will let channel pros and their customers stream complete, personalized virtual desktops to a wide range of devices at a fixed monthly price. By Rich Freeman
Tweet

Microsoft has unveiled a cloud-based version of its Windows operating system that streams complete, personalized virtual desktops to a wide range of devices.

Called Windows 365 and due to reach market on August 2nd, the new offering was announced during the 2021 edition of Microsoft’s Inspire partner conference, which takes place today and tomorrow online. According to Microsoft CEO Satya Nadella, the service introduces an entirely new product category called the “Cloud PC” to the worlds of cloud and personal computing.

“With Windows 365, we are making Windows available not just on Windows devices but any device harnessing the power of the cloud. This has never been done before,” he said during an Inspire keynote this morning. “Just like applications were brought to the cloud with SaaS, we are now bringing the operating system to the cloud with Windows 365.”

The service runs on the Microsoft Azure public cloud within the same infrastructure used to deliver the Microsoft 365 productivity suite, integrates with Azure Active Directory, and supports both Windows 10 and the forthcoming Windows 11. Though it’s based on Microsoft’s Azure Virtual Desktop (AVD) solution as well, the system is designed to be much simpler to configure and use.

“With just a few clicks, you can set up your Cloud PC and stream the full Windows experience from the Microsoft cloud to a personal or a corporate device,” Nadella said in his presentation.

In addition to Windows-based desktops and laptops, users can access Windows 365 from Macs, iOS devices like iPads, and Android or Linux devices. Changes made on any of those machines will be reflected on all of the others a given user owns immediately.

“You can pick up right where you left off, because the state of your Cloud PC remains the same even when you switch devices,” Nadella said today.

Users must be connected to the internet to use Windows 365, a constraint likely to limit interest in the product among people who frequently need offline access to their desktop.

To ensure security, Windows 365 comes with end-to-end data encryption and multifactor authentication, and is compatible with Microsoft’s Defender for Endpoint antivirus solution. Administrators can apply conditional access policies and role-based permissions as well.

Two versions of the service will be available when it launches next month. Windows 365 Enterprise is designed for corporate IT departments and channel pros familiar enough with the Microsoft cloud to create an Azure account, operate an Azure Active Directory, and perform other management tasks via the Microsoft Endpoint Manager administration tool and Intune mobile device management platform.

Windows 365 Business is a streamlined option for companies with less Azure and desktop virtualization experience that want Microsoft to handle most of the setup and configuration.

“It would kind of be more for the MSPs who might go down the street to Best Buy and purchase a PC for their clients,” says Joseph Landes, chief revenue officer of Nerdio, a provider of tools for deploying, managing, and optimizing Microsoft Azure and Azure Virtual Desktop.

Welcome to the Year of the Predictable
END_OF_DOCUMENT_TOKEN_TO_BE_REPLACED

LG Gram for Business 17 (2020): Big Reasons to Like It
END_OF_DOCUMENT_TOKEN_TO_BE_REPLACED