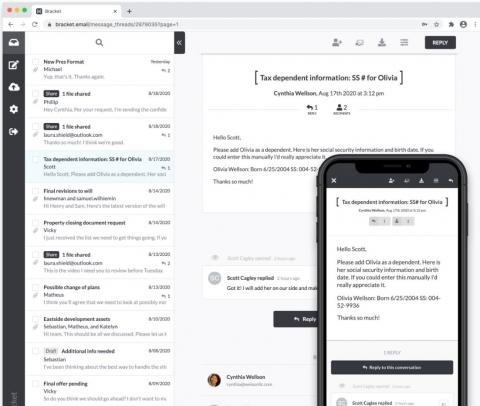 The company now enjoys exclusive rights to the combination of technologies it uses in its Bracket product to make shielding emails from unauthorized viewers easier for senders and recipients, which in turn makes email encryption likelier to be used. By Rich Freeman
Tweet

Email security vendor Mailprotector has been awarded a patent by the federal government for Bracket, its message encryption and file transfer solution.

Patent number 10708244, which was officially granted by the U.S. Patent and Trademark Office in July, gives Mailprotector exclusive rights to the combination of technologies Bracket employs to make shielding emails from unauthorized viewers easier for senders and recipients. That in turn makes email encryption likelier to be used.

“We are elated at the patent office’s acknowledgment of Bracket as a revolutionary encryption technology,” said David Setzer, Mailprotector’s CEO, in a press statement. “One of our core goals is to empower managed services providers with unique and highly valued services they can take to market. While our partners usually provide all the external validation we need, this patent confirms our commitment to technical innovation. Bracket gives MSPs a true advantage and differentiator in the security and encryption space, solves real end-user needs, and delivers highly profitable recurring revenue streams.”

Introduced in 2017, Bracket is designed to avoid inconveniences that often deter busy end users from encrypting messages. Unlike many products, for example, the Mailprotector system doesn’t come with specialized apps or plug-ins for people to install, and doesn’t require encrypted message recipients to open an account. It also relies on one-click authentication links, sent via email and good for only 15 minutes, rather than passwords to sign users in.

To encrypt a message in any email application on any operating system, meanwhile, senders need only enclose the subject line in square brackets. Bracket’s encryption algorithm uses AES256 standards and geographically distributed keys.

“Our design goal was to make security more accessible to users and our partners, not to create technology for technology’s sake,” said Mailprotector CTO Ben Hathaway in prepared remarks. “That’s what makes Bracket special. The combination of ease of use with innovative and highly effective encryption. Our unique approach, detailed in the patent, allows us to offer users complete data privacy and security in a simple to use solution.”

Version 3.0 of Bracket, which shipped earlier this year, spares companies from making MX record changes when encrypting Office 365 mail, and also lets users send up to 25 attachments per message.

Mailprotector expects to grow its partner base by 30 to 40% this year, according to Matt Scully, who became the vendor’s channel chief in June. The company offers products for spam filtering, archiving, and email hosting, among other tasks, in addition to Bracket.

Global spending on security-related hardware, software, and services will rise 6% this year to $125.2 billion, according to IDC.