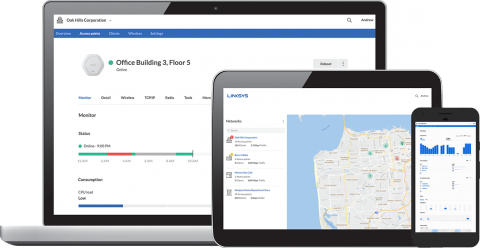 Intended for use with the vendor’s commercial access points, the new system is designed to make Linksys a business networking leader in the SMB channel by providing a simple, affordable foundation for Wi-Fi-as-a-service offerings. By Rich Freeman
Tweet

In a major bid to establish itself as a go-to choice among channel pros in business networking, Belkin International Inc.’s Linksys unit has introduced a cloud-based management platform.

According to Wayne Newton, director of commercial markets for the Americas at Linksys, Cloud Manager is designed to turn a company chiefly associated with consumer-grade products since Belkin bought it from Cisco Systems Inc. five years ago into a serious player in the SMB channel.

“This is the single largest event for us as a brand in our commercial business since being sold,” he says.

The new solution seeks to fill what Linksys sees as a gap in the market for networking gear aimed at businesses with 100 seats or less. At present, the company contends, channel pros serving such organizations must choose between affordable products with limited performance and no cloud management from manufacturers such as Ubiquiti Networks Inc. and pricier units from higher-end vendors like Cisco Meraki with features that SMBs don’t need.

“There’s nothing in between that kind of has the right cost and the right features for them,” says Anthony Pham, a senior product manager at Linksys.

The new solution is engineered to be easily installed, he continues. Access points pre-equipped with Cloud Manager connect to the cloud automatically as soon as they’re plugged in, and can be configured remotely whether online or offline. The result, Linksys says, is “zero-touch provisioning.”

According to Pham, Cloud Manager’s combination of simplicity, affordability, and remote manageability make it a strong fit for channel pros looking to earn recurring revenue by providing managed networking services to their SMB customers.

At present, Linksys Cloud Manager comes pre-installed on the vendor’s LAPAC1200C and LAPAC1750C access points, which list at $199.99 and $329.99 respectively. LAPAC2600C units, priced at $499.99, are slated to begin shipping with the solution in November. Over time, Linksys plans to roll the new system out across the rest of its Business Wireless-AC Access Points portfolio.

In the years since its acquisition by Belkin, Linksys products have been popular with consumers and very small businesses that purchase networking gear through consumer channels.