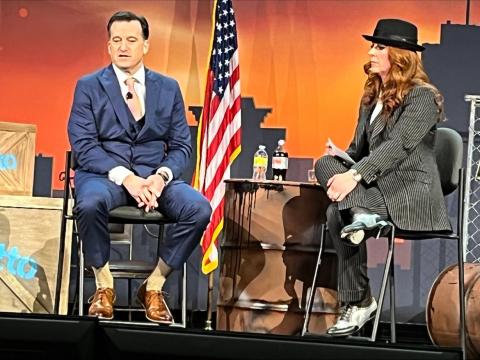 Fred Voccola addressed partner concerns about the Datto acquisition and previewed an upcoming AI engine for Kaseya IT Complete in a Q&A with Robin Robins. By Colleen Frye
Tweet

Kaseya CEO Fred Voccola took the stage with Robin Robins, CEO of Technology Marketing Toolkit, on the opening night of TMT’s annual IT Sales and Marketing Boot Camp in Nashville on April 19, addressing concerns some in the managed service provider community have about his company’s acquisition of Datto, and announcing a new artificial intelligence engine for the IT Complete platform that will be released in June at the ConnectIT customer conference.

First, though, Voccola reiterated that Datto is not going away, ironically sitting beneath the “Datto Hotel” sign on the “Godfather” themed stage scenery, a silhouette of Datto Senior Vice President of Business Development Rob Rae in the faux window. “Now you have competitive products. You have two RMMs and two backups and two PSAs. Yes, we do. And we will continue that for the foreseeable future. … We are supporting all products moving forward.”

He added that Datto will be run as an autonomous business unit, similar to other Kaseya acquisitions RapidFire Tools and ID Agent.

Robins pressed him on the bone of contention for some Datto partners: dislike of the three-year contracts Kaseya is known for.

Voccola, however, maintained that Kaseya pricing is more advantageous to channel partners over the longer term. “It's much more profitable for our customers, our MSPs partners, constituents, to buy products from Kaseya that are 30, 50, 60% less expensive on a three-year commitment, when that price will not go up than to buy a competitor's product that's 30, 40, 50% more expensive and rising 10 to 20% a year.”

Still, he acknowledged conversations on Reddit and other channels among the MSP community that have been highly critical of the acquisition and assured the crowd that Kaseya is not “the place software products go to die. I challenge anyone here. I put a million bucks of my money against a hundred bucks of your money to [go to] St. Jude [Hospital for Children]. I will guarantee you there's been a 500 to a 1,000% innovation improvement in every single product that we bought. You're hearing it. This is public.”

Also public now is his announcement of the Cooper Intelligence Engine, named after his dog, Cooper, that is designed to help MSPs fully leverage all the features and functions in their tools. “It's an AI engine that watches how the user's using whatever module in IT Complete. RMM backup, security, whatever. It monitors and tells you, are you using the product properly? There's a feature that you could be using that would make your life better.”

For instance, the AI engine will be able to alert you when there’s a new release and note that “you haven't consumed the release notes.” Voccola says it’s been under development for a few years and has been “a pet project” of his, with a desire to help customer get the most out of their products. “It's going to be embedded inside of all of our platforms and will in real time, let your users and let you, as the owners know, is the product being used properly?”

He was quick to jokingly assure the audience, though, “You can shut it off.”

Finally, Voccola shared with attendees that he felt “lucky” to run a great company. “I know there's a group of MSPs, half of you guys probably hate me. I wish I could change that. Hopefully we earn the right to change that.”