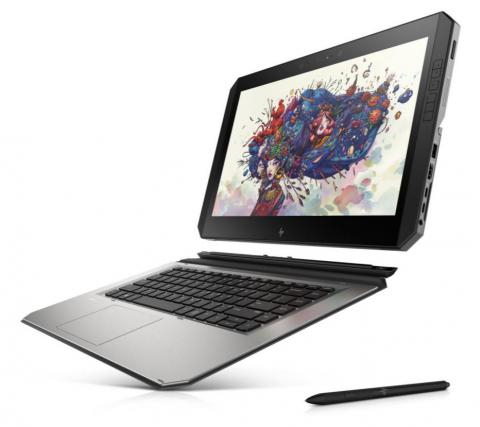 Designed to be highly mobile and highly powerful, the new device targets users who work with large files and would prefer to carry one device rather than a laptop for productivity and tablet for creative efforts. By Rich Freeman
Tweet

HP Inc. has introduced what it calls the world’s most powerful 2-in-1 workstation with a detachable display.

Named the ZBook x2, the new offering is targeted at artists, designers, and digital imaging specialists who want hardware that’s both highly mobile and highly powerful, and would rather carry one device than a laptop for productivity tasks and tablet for creative work.

“As the world’s most powerful and first detachable PC workstation, there is no device better suited to turn the vision of artists and designers into reality,” said Xavier Garcia, Palo Alto, Calif.-based HP’s vice president and general manager for Z workstations, in a press statement. "With the HP ZBook x2, we are delivering the perfect tool to accelerate the creative process—with unprecedented power, performance and natural ease-of-use. This device will make it easier than ever for creators to do what they do best—bring inspiring new ideas to life and enrich the world around us.”

According to HP, the ZBook x2 can be used as a free-standing 14-inch notebook, a docked notebook connected to as many as five standard-resolution monitors or two 4K displays, and as a tablet replacement. In what the manufacturer calls “detached mode,” the device lets users create on the tablet while retaining access to shortcuts and other keyboard functions via Bluetooth connectivity.

The workstation’s graphics and processing horsepower are supplied by 7th generation or 8th generation Intel Core processors, NVIDIA Quadro graphics cards, and up to 32 GB of dual-channel memory. A high-speed Z Turbo solid-state drive provides up to two TB of PCIe storage capacity, while a full-sized SD card slot provides supplemental space for photographs, drawings, and recordings. Twin Thunderbolt 3 ports allow users to transfer videos, high-resolution photographs, and other large files to or from cameras, smartphones, and other external hardware.

To ensure the device is portable as well as speedy, the ZBook x2 features an aluminum and die-cast magnesium chassis measuring 3.64 pounds/14.3 mm in tablet mode and 4.78 pounds/20.3 mm in laptop mode.

ZBook x2 shipments are scheduled to begin in December. Pricing begins at $1,749.

Jabra PanaCast Review - Get Your Huddle On
END_OF_DOCUMENT_TOKEN_TO_BE_REPLACED