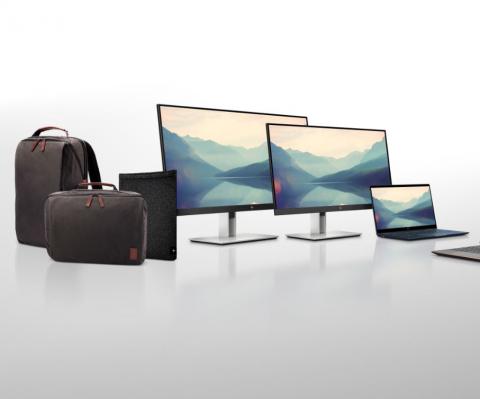 HP Inc. has unveiled a collection of new and updated PCs, displays, and accessories for mobile and desktop users.

Introduced on the eve of the CES 2020 conference in Las Vegas, the products include what HP calls the world’s first business 2-in-1 with both built-in 5G networking and built-in support for the Tile Bluetooth location tracking system; the world’s first all-in-one PC with NVIDIA GeForce RTX graphics; and the world’s first docking displays with embedded network management capabilities and “single power-on” functionality.

Many of the new products are made largely or entirely of recycled materials as well, according to Mike Nash, HP’s chief technologist and vice president of customer experience and portfolio strategy for personal systems.

“Our goal at HP is to create the world’s most sustainable PC portfolio, period,” he says.

Included among the updated products is a refreshed edition of the Elite Dragonfly PC that HP introduced last September. An ultralight convertible that weighs less than a kilogram, the device will acquire 5G connectivity, along with “smart signal” technology designed to boost antenna performance, in mid-2020.

“This is going to allow for significant improvements in performance and connectivity,” observes Cory McElroy, HP’s head of product management and marketing for premium commercial notebooks.

5G connectivity will initially be available for Elite Dragonfly users exclusively through Sprint. “When looking at the carrier landscape, we really felt a strong connection with where Sprint’s focused from a build out across SMB and enterprise and where we’re driving the Dragonfly product,” McElroy says. Additional carrier partnerships will be announced later this year.

In the first quarter of the year, meanwhile, the Elite Dragonfly will gain Bluetooth device tracking via embedded support for the Tile platform, which lets users see the location of lost, stolen, or misplaced objects on smartphone and desktop apps. According to HP, Tile users find some 6 million items daily with the technology.

“We know many people are actually putting Tiles on laptops today, but we thought we could do better,” McElroy says. “We think it’s just a very natural relationship on a product like this for our most mobile customers that have highly sensitive data.”

Updated versions of the Elite Dragonfly will also feature HP’s Sure View Reflect privacy system, which lets users restrict the viewing range of sensitive content in both light and dark environments.

The new device, which is available immediately, also features a 2.1 channel audio system from Bang & Olufsen designed to spare users from pairing the system with external speakers, as well as what HP calls the world’s widest 4K display in an all-in-one.

Think Hybrid When Thinking Cloud, HPE Says
How Can You Engage 100% of Your Employees? DEI Initiatives Are a Great Start
END_OF_DOCUMENT_TOKEN_TO_BE_REPLACED

Jabra PanaCast Review - Get Your Huddle On
END_OF_DOCUMENT_TOKEN_TO_BE_REPLACED