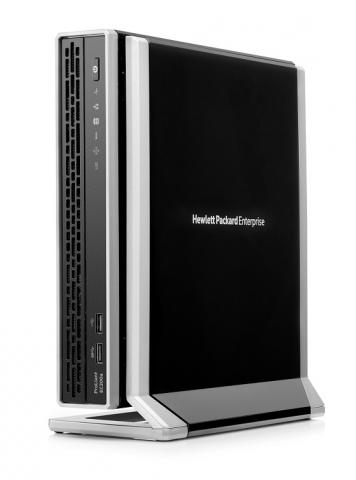 Sold exclusively through the channel, the new system will be available in the U.S. and U.K. beginning April 28th. According to McLeod Glass (pictured), vice president and general manager of SMB solutions and tower servers at HPE, it’s custom-tailored to the needs of SMB solution providers eager to embrace cloud computing but unsure of how to do so.

“We believe we’ve got a very compelling offering that we can deliver through our partners that helps them really make that transformation,” he says.

The customers most of those partners serve continue to make extensive use of on-premises applications, Glass notes, which is why HPE’s new offering blends a compact, locally installed private cloud infrastructure with built-in links to a wide range of external public clouds.

The system is also optimized for easy installation and administration. Built with pre-assembled hardware and software components and pre-integrated with cloud services including Office 365 and Microsoft Azure, it offers automated maintenance, patching, and upgrade functionality as well. Partners can cluster multiple appliances to accommodate growing end user requirements, or quickly attach an external expansion box capable of adding up to 24 terabytes of additional storage capacity.

“You can scale users by adding more appliances, but you can also just scale storage,” Glass observes.

Pricing for the new solution is subscription-based, to align with the business model of managed and cloud service providers that collect monthly recurring fees rather than lump sum upfront payments. Rates will vary based on the configuration options a given reseller chooses. The standard edition of the product comes with firewall, gateway, file sharing, and other features, but partners can add optional extensions for functions like backup and disaster recovery at extra cost.

Partners are free to set end user pricing for the solution however they wish, Glass emphasizes, giving them complete control over margins.

Today’s announcement is the culmination of a process that began several years ago, well before the former Hewlett Packard split into two separate businesses.

“We had a vision of a solution that we wanted to deliver for small and midsize customers and for our partners,” Glass says. Though they considered building the entire solution from scratch internally, the company ultimately concluded that incorporating an existing third-party offering instead would enable it get a product to market sooner, and that Zynstra’s solution was a good fit for its vision.

“There really wasn’t another compelling solution out there that delivered on the value that we wanted to deliver,” Glass recalls.

For its part, Zynstra had been using HP hardware and participating in HP beta programs for some time. Partnering with the company on a joint hybrid cloud solution seemed like a natural next step.

“We had a completely aligned vision,” says Nick East, co-founder and CEO of Zynstra.

According to Glass, the HPE ProLiant Easy Connect Managed Hybrid solution is the first entry in what will eventually be a larger Easy Connect product portfolio.

“You’ll continue to hear a lot more from us,” he says.

HPE also plans to give partners a wider, pick-and-choose menu of ISV add-on solutions for its Easy Connect products, and to let partners layer their own solutions and services on top of the system. Glass, who declined to discuss timing on those enhancements, encouraged partners to stay tuned.

“We’ve got what I would say is a very crowded roadmap of capabilities that we’ll be continuing to deliver with this box,” he says.

Profitability in the Cloud: Your Guide to Capturing New Markets
May 18th, 2021

LG Gram for Business 17 (2020): Big Reasons to Like It
END_OF_DOCUMENT_TOKEN_TO_BE_REPLACED